The Beast in the Jungle (Vineyard Theatre) 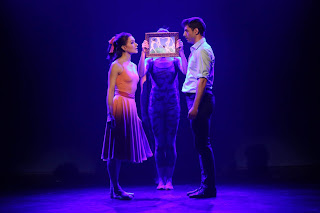 
The top-flight team that last brought us “The Scottsboro Boys” at the Vineyard -- composer John Kander, book writer David Thompson, and director/choreographer Susan Stroman -- have come up with something completely different on this occasion, a “dance play,” loosely based on Henry James’ novella, and updated to the present day.


The narrative -- which admittedly veers considerably from James’ more subtle tale -- charts how womanizing art dealer John Marcher (Tony Yazbek) meets May Bertram (Irina Dvorovenko), but each time he has the chance to surrender to love, a beast of his imagination (and spookily embodied here by some clever puppetry manipulated by the ensemble), prevents fulfillment.


They first meet in Naples and spend an idyllic day at the beach (until John’s demon gets in the way, that is), then 20 years later in England’s Cotswalds, by which time May is a noted photographer and married to a wealthy, gun-toting Englishman (excellent Teagle F. Bougere), and then, finally, three decades after that at an art gallery. The real beast is revealed to be nothing more than his fear of commitment.


The play begins with an elder Marcher, well played by Peter Friedman, visited by his nephew (Yazbek), a short story writer, who has just broken up with his girlfriend. Rather like the elderly Marchioness in Noel Coward’s “Bitter Sweet” advising the young lovers not to miss their chance for love, Marcher counsels his impulsive nephew to return to the girl he loves. And thus his own story unfolds.


Structurally, though, I thought the switch from rather prosaic spoken dialogue scenes -- including some jarringly un-Jamesian f-bombs -- to the wonderfully lyrical dancing didn’t quite gel. I think I’d have preferred the spoken portions delivered as sung recitative to maintain a more cohesive musical flow.


Yazbek, fresh from his show-stopping rendition of “The Right Girl” from “Follies” in Stroman’s “Prince of Broadway” is again superb as the young Marcher, dancing romantically or rhythmically and dramatically conveying his ardent romantic feelings and tortured fear of the beast. And he handles those framing present-day scenes as the bespectacled nephew with good contrast.


Irina Dvorovenko, so impressive recently in the Encores’ “Grand Hotel” as the lovelorn aging ballerina, is equally bewitching here, both dancing and acting, as her character ages over the decades. So, too, there’s wonderful chemistry between her and Yazbek.


John Kander’s musical score -- purely instrumental, no songs here -- consists of nothing but waltzes, and ranks with his best. I hope a CD may be coming. The nine-piece ensemble under the direction of David Loud plays the mesmerizing melodies most feelingly.

Stroman’s choreography is, as usual, ceaselessly inventive, and cleverly utilizes her terrific dancers -- Maira Barriga, Elizabeth Dugas, Leah Hofmann, Naomi Kakuk, Brittany Marcin Maschmeyer, and Erin N. Moore -- modelling their movements on Matisse’s “La Danse” (that painting having special significance to May). So they morph from the women with whom young John shamelessly flirts, to stately statuary on pedestals who magically come to life, to young ladies gamboling on the beach with scarves, to New York socialites. And there are further magical Stroman touches such as some witty sexual interplay on a picnic blanket, and May swimming into the sea to retrieve an unmoored skiff.


Though the story is rather somber, Stroman leavens the mood with many of these delightfully light moments.


“Wasn’t it just beautiful?” an elderly lady asked me about a block from the theater when she saw the program in my hand, summarizing succinctly the general audience reaction.

Photo by Carol Rosegg: Irina Dvorovenko and Tony Yazbeck Print this post
Posted by Harry Forbes at 6:55 AM