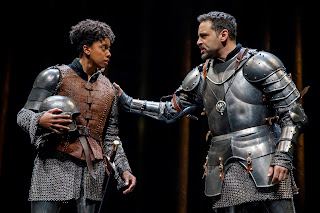 
Any production of George Bernard Shaw’s classic 1923 telling of the 15th century Joan of Arc, her battlefield triumphs, and her trial for heresy must be strongly anchored in the performance of the actress in the name part. So let it be said that Condola Rashad is a very persuasive Maid throughout, playing with resolute conviction and purity, and missing perhaps only a degree of spiritual fervor when pushed to the point of recanting her “voices” at the trial.


The color blind casting doesn’t matter a jot, any more than it did when, ages ago, I saw my first “St. Joan” on stage with the late Diana Sands on the Vivian Beaumont stage where, as happenstance would have it, Shaw’s musicalized “Pygmalion,” “My Fair Lady” now holds the stage so commandingly. (If your appetite is whetted for more Shaw, so too there’s always David Staller’s excellent monthly readings in his Project Shaw series.)


Daniel Sullivan, who mounted such a fine production of “The Little Foxes” last season, directs with an equally sure hand here, and has assembled an especially good ensemble, though economic exigencies, presumably, entail quite a bit of doubling of parts. The actors are more than up to the challenge.


Thus we have the commanding Patrick Page as Robert de Baudricourt, whom Joan must convince to equip her with men to rout the English occupiers, in the early scenes, and then a fine Inquisitor at the trial; John Glover plays both the Archbishop of Reims and and English soldier; and Robert Stanton as Chaplain de Stogumber, convinced the Maid of Orleans is a witch, and Baudricourt’s steward. Also excelling in multiple roles are Matthew Saldivar and Max Gordon Moore.


Among other highly accomplished portrayals, Walter Bobbie plays the Bishop of Beauvais, Jack Davenport his opponent, the arrogant Earl of Warwick, Daniel Sunjata the stalwart Dunois, Joan’s comrade-in-arms; and Adam Chandler-Berat the weak Dauphin, later Charles VII after Joan succeeds in having him crowned at Rheims cathedral.


Shaw described the play as a “tragedy without villains,” and indeed though one, of course, roots for Joan at her trial, and doesn’t want to have her burned at the stake, the playwright has laid out the arguments on all sides so we understand fully the political and religious motives behind their fatal verdict.


The 25-years-after epilogue which has Joan appearing to Charles in a dream with other characters -- including a 20th century emissary informing her of her canonization three years earlier -- is written in a lightly humorous tone, wrapping up things in dispassionate perspective.


Scott Pask’s set eschews spectacle for an all purpose backdrop of a dominating backdrop of organ pipes, lighted expertly by Justin Townsend, most dramatically when Joan is burned at the stake offstage. Jane Greenwood’s costumes are traditionally medieval


Productions of “St. Joan,” despite its classic stature, are relatively rare, so MTC’s production is well worth your time.


Photo by Joan Marcus. Condola Rashad and Daniel Sunjata.
Print this post
Posted by Harry Forbes at 9:00 AM