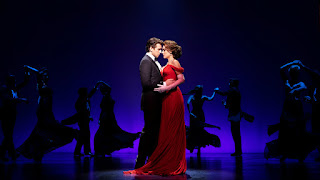 
It seems to me that anyone among the legions of moviegoers who loved the 1990 Julia Roberts-Richard Gere film, will be pleased with this enjoyable musicalization with a somewhat sanitized script by the late Garry Marshall (who, of course, wrote and directed the film) and J.F. Lawton.


The 1980’s pop-style music and lyrics are by Bryan Adams and Jim Vallance, and though the lyrics may not exactly be plot-advancing, nor the last word in erudition, I rather liked them on first hearing.


Samantha Barks, who made such a moving Eponine in the film of “Les Miserable” after playing that role on stage and also winning acclaim as Nancy in “Oliver!” has the Roberts part and she’s very watchable indeed. This is a distinguished Broadway debut and, in hindsight, a far better choice for her than the quick-closing “Amelie” would have been (she created that role at Berkeley Rep, but Philippa Soo brought it to New York).  Andy Karl, late of “Groundhog Day,” makes a fine leading man, and there’s good chemistry between them.


There’s exceptionally strong support from Orfeh (Mrs. Karl in real life), Eric Anderson, wonderfully versatile as both the suave hotel manager of the Beverly Wilshire and a street hustler called Happy Man, and Jason Danieley in a mostly non-singing role as Edward’s slimey lawyer, not afraid to play the repellant aspects of the role.


The plot follows the movie closely. Vivian (Barks) and Kit (Orfeh) are Hollywood Boulevard hookers looking to better themselves. Vivian is picked up by a wealthy corporate raider Edward (Karl) -- after meeting him “cute” on a bench -- and he pays for her services for a week, setting her up in his suite at the plush Beverly Wilshire, and bringing her to business meetings and social functions. Edward takes Vivian for a shopping spree on Rodeo Drive, and she emerges, Eliza Doolittle-like, as a lady.


It is one of the flaws of the property, though, that Vivian remains rather common longer than someone with the innate intelligence and good heartedness to captivate Edward really should. But I suppose if her full transformation occurred sooner, there’d be no plot.


And in the course of their relationship, she humanizes Edward and softens his ruthless business tactics.


The songs are mostly of the generic variety we’ve come to expect these days, and the sentiments unsurprising. Vivian sings of wanting to be “Anywhere But Here” and later, after experiencing a better life, she vows “I Can’t Go Back.” Edward longs for the “Freedom” to change. But they’re all valid character expressions, and generally quite catchy. There’s an enjoyable tango, “On a Night Like Tonight” wherein Mr. Thompson teaches Vivian how to dance with an assist from the staff, nicely staged by Mitchell. The big production number, “Never Give Up on a Dream” showed Anderson, Orfeh and the cast in top form with both Mitchell and Rockwell pulling out their respective stops. 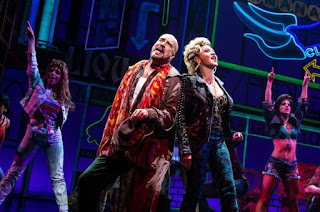 The scene where Edwards takes Vivian to the opera is cleverly and fluidly recreated here. While Allison Blackwell and Brian Calì emote from “La Traviata,” Edward sings a counter melody of  “You and I” to Vivian in their box seat above. Vivian’s 11 o’clock number, “I Can’t Go Back (I’ve Seen a Different World,” is appropriately stirring.


Other production credits are top of the line including Gregg Barnes’ costumes, which satisfyingly mirror those in the film, Kenneth Posner and Philip S. Rosenberg’s lighting, and John Shivers’ sound design.


All in all, this is a well-crafted, rom-com audience pleaser.