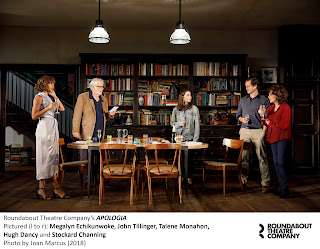 Stockard Channing has returned to New York in the play that brought her deserved acclaim in London’s West End. In Alexi Kaye Campbell’s “Apologia,” she plays an American expatriate living in England. An art historian, her character Kristin Miller was once a 1960s activist. Now her grown sons return home to celebrate her birthday, but also to castigate her for abandoning them as children.

The catalyst for this unleashing of years of pent-up resentment is her recently published memoir in which neither son is even mentioned, an omission which would seem to confirm her lack of even a modicum of maternal concern.

When son Peter enters in the first act with, of all things, an American evangelical girlfriend named Trudi, Kristin fairly bristles with sarcasm and criticism. (Kristin has brought them up to believe religion is “patriarchal propaganda”), and is less than gracious when overly-eager-to-please Trudi presents her with the gift of an African mask which she and Peter picked up on recent trip to Botswana.

Later, over dinner, by which time they are joined by other son Simon’s soap opera actress girlfriend Claire (Megalyn Echikunwoke) and Kristin’s longtime gay friend Hugh (director John Tillinger in a rare return to acting), tensions boil over. Then when her disturbed son Simon arrives in the middle of the night, having just injured himself in a fall, he lets Kristin know his own feelings, while she nurses his wounds.

Hugh Dancy plays both brothers, as they are never on stage together, skillfully differentiating each, and conveying the emotional scars Kristin’s absenteeism left on both of them. As intimidating as Kristin can be, Talene Monahon shows Trudi to be fearlessly bold in stating her own convictions however naive, and continuing to praise Kristin with all sincerity despite the latter’s relentless disparagement. Echikunwoke nails Claire, whom Kristin derides as self-centered and egotistical. And Tillinger delivers his droll interjections over dinner and after with masterful timing.

The play would seem to pit Kristin’s past activism against her role as mother, but in its essentials, it’s the old story of a parent failing at balancing any career and parental duties. But Campbell’s dialogue is lively -- and Channing delivers her brittle retorts masterfully -- with intriguing revelations along the way. Campbell eventually shows these characters to be not what they seem, while Daniel Aukin orchestrates all the familial dysfunction perfectly.

Oh, and about that title, if you were wondering, Kristin defines it at one point. “It means a formal, written defense of one’s opinions or conduct...not to be confused with an apology.” And as you might infer from the above plot outline, Kristin does indeed have some "'splaining to do," as Ricky Ricardo might have said.

(Laura Pels Theatre in the Harold and Miriam Steinberg Center for Theatre, 111 West 46th Street; 212-719-1300 or roundabouttheatre.org; through December 16)

Print this post
Posted by Harry Forbes at 4:05 PM