The Ferryman (Bernard B. Jacobs Theatre) 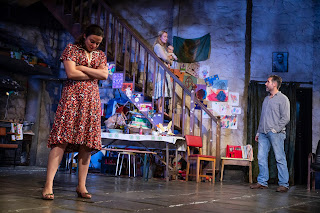 
Jez Butterworth’s gripping domestic drama from London, brilliantly acted by an ensemble cast, about a large family in Northern Ireland in the ominous shadow of the Irish Republican Army, circa early 1980s at the height of the Troubles, is everything friends who had seen it London raved about. (The play sold out in one day when it premiered at the Royal Court prior to its West End transfer.)


In the opening prologue, a priest named Horrigan (Charles Dale) has been summoned to meet with IRA kingpin Muldoon (Stuart Graham) about the grisly discovery in a peat bog of the body of one Seamus Carney who went missing a decade earlier, ostensibly a victim of the IRA. Muldoon wants Father Horrigan not only to inform the dead man’s family, but also, as we later learn, to ask their silence.


The next scene brings us to the bustling farm household of Quinn Carney (Paddy Considine), brother of the deceased Seamus, Quinn’s pale wife Mary (Genevieve O’Reilly), and their seven children (including, rather remarkably, an actual baby). There’s also his wheelchair bound Aunt Maggie Far Away (Fionnula Flanagan), so called because she sits in her own silent reverie but occasionally breaks her silence with tales from the past and auguries of the future, stern Aunt Pat (Dearbhla Molloy), a staunch anti-British Republican transfixed by her radio and what she views as the latest hateful pronouncements from Prime Minister Margaret Thatcher, and gregarious classics-quoting Uncle Patrick (Mark Lambert). It is he who explains the allusion to “ferryman” of the title. It is Virgil’s Charon who plied his trade on the River Styx.


The aunts are especially memorable. Flanagan’s long recitation about a lost love intertwined with fanciful tales of fairies and banshees is as mesmerizing for the audience as it is for the children who eagerly soak up these stories, and their sometimes gruesome details, at her feet. Similarly, Aunt Pat’s fiercely related story of another loss during the Easter Rising is equally compelling.


There’s also Seamus’ wife Caitlin (superb Laura Donnelly) who cooks the meals in the household and, in all but name, serves as mother, as Mary mostly keeps to her room, felled by what she says are various viruses. It soon becomes evident that there is some sort of romantic bond between Caitlin and Quinn. Caitlin has a teenage son Oisin (Rob Malone), a furtive, angry lad constantly spying on others’ conversations, mirroring the play’s theme of the sinister intertwining of the personal and the political.


Adding to the youthful energy are visiting Corcoran cousins, including a boastful punk Shane (Tom Glynn-Carney) who has succumbed to the glamour of the IRA. In a finely acted scene, his brother Declan (Michael Quinton McArthur) taunts him for his loose-lipped indiscretion, followed shortly by an articulate warning along similar lines from eldest Carney son Michael (Fra Fee), the most morally upright of the Carney brood. 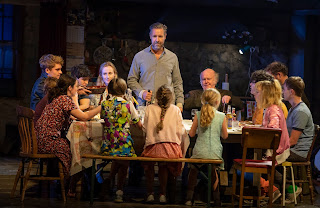 The acting is powerful throughout. Considine exudes quiet power as Quinn who had been an IRA member years earlier but now wants nothing to do with them. Justin Edwards is brilliant as Tom Kettle, a slow-witted displaced Englishman who has lived on the property since childhood, a tangible symbol of the British occupation. His recitation of Sir Walter Raleigh’s “The Silent Lover” is a dramatic highpoint. Graham’s deadly calm and confident persona as Muldoon makes him all the more fearsome.


And it should be mentioned that besides the extraordinary aforementioned baby, there’s also the unusual appearance of a live goose and rabbit.


As the program note informs us, “For five months, Republican inmates in the Maze Prison have been on hunger strike to demand they be recognized as political prisoners,” and Thatcher refuses to do so. When the play opens, five have already died including Bobby Sands. This is the situation the IRA hopes to use for sympathy and support.


The family’s raucous celebration of the close of harvest day will be ended by surprise guests including Muldoon which propel the rest of the absorbing action. Much of the pleasure of Butterworth’s epic play is putting together the pieces of the plot as they are revealed, so I shan’t say more.


Butterworth’s play is at times reminiscent of those of Martin McDonagh, not to mention, the classic playwrights such as Synge and O’Casey, but his voice is brilliantly his own. At times, it’s difficult to sort out who’s who among the large family, but that’s part of his canny storytelling technique.


Sam Mendes directs with a brilliant ear for the ominous undertone beneath the cheerfully rambunctious family activities. The brilliant cast truly inhabit their roles, and every action feels truly organic. The older children are realistically boisterous, the younger ones nonchalantly vulgar and fascinated, as children can be, by violence.


The play is about three and one half hours long, but you won’t be bored. It’s the sort of play that generates cheers and bravos at the end, and deserves every one of them.