I Was Most Alive With You (Playwrights Horizons) 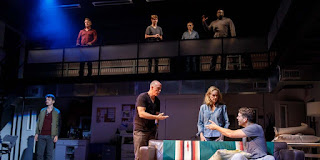 
Craig Lucas has found inspiration for his latest play from, of all things, The Book of Job, fashioning a modern story about a TV writer and his family beset with a deluge of bad fortune leading them to question God, free will, and other such weighty matters.


Though the underlying philosophical message may be dense, the narrative -- starting in 2010, with extended flashbacks to critical events that befell the characters in 2009 -- is clear enough, completely absorbing, and profoundly moving. You might say this is a spectacular demonstration of “when bad things happen to good people,” though that would be a huge oversimplification.


Ash (Michael Gaston) is the writer of a long-running series, and when the play opens, barely recovered from the tragic events we will soon observe in the flashback scenes (and I shan’t reveal them as Lucas unfolds them in masterly storyteller fashion as the play progresses), and he and his longtime writing partner and friend Astrid (Marianna Bassham) -- attracted to each other, but honorably platonic -- having been trying to come up with a new idea after their fallow period necessitated by the aforementioned events.


Ash’s deaf son Knox (Russell Harvard), once a substance abuser, is madly infatuated with an opiod-addicted lover Farhad (Tad Cooley). Ash, for his part, had drug problems in his youth, and even did some jail time. He is in a fractious marriage with his not very accurately named wife Pleasant (Lisa Emery). His mother Carla (Lois Smith) -- who lives with her caretaker Mariama (Gameela Wright), whose estranged son happens to be on Death Row, presides over the annual Thanksgiving dinner, a gathering that will explode with revelations and recriminations among all the characters, and culminate with the horrific incident that propels the rest of the play.


After everything that has happened, Ash and Astrid decide to use the Book of Job material for their new project, as the relevant scenes from the family troubles are interwoven. It’s difficult to tell whether Ash and Astrid are guiding the play’s narrative in a fictionalized way or whether the events described are completely as they were. The ending, however, is intentionally ambiguous.


That may sound like heavy going, and some have found the preponderance of misery excessive, I was absolutely riveted throughout.

Uniquely, the play -- originally produced by Boston’s Huntington Theatre Company -- is performed on two levels on Arnulfo Maldonado’s split level set, the main action below, and above, a “shadow” cast of silent performers (Seth Gore, Beth Applebaum, Amelia Hensley, Harold Fox, Anthony Natale, Kalen Feeley, Alexandria Wailes) signing the dialogue. ASL is a significant plot point too. Knox, for instance, can actually speak but chooses not to do so. His partner Farhad, also partly deaf, has had an implant, and refuses to sign. Pleasant has never believed in signing, a sore point with all, although it was through her obstinacy that Knox learned to speak. Throughout, the cast morphs between speaking and signing, and when it’s only the latter, super-titles projected on the stage, provide the translation.


All of the performances are superb, though the extraordinary Harvard (“There Will Be Blood,” “Tribes”) -- and for whom Lucas was apparently inspired to create a vehicle -- must be singled out for his heartbreakingly powerful work. The most dramatic adversities involve his character, and it’s hard to know whether Job is meant to be the not-very-Job-like Ash, who relates the action of the play, or Knox. Or perhaps it’s all the characters.


The complexities of the work are deftly choreographed by Tyne Rafaeli, with Sabrina Dennison as Director of Artistic Sign Language, as ASL is such a major component.