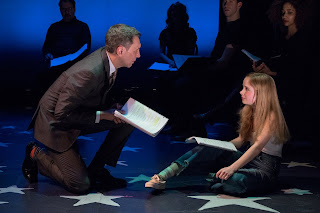 York’s three-show homage to Alan Jay Lerner in celebration of the lyricist’s centenary is concluding with arguably the most fascinating of the bunch: the 1971 musicalization of Vladimir Nabokov’s notorious 1955 novel “Lolita.”  Lerner’s musical collaborator on this occasion was John Barry, better known for his numerous film scores (the James Bond series, “Born Free,” etc.), but he had dabbled in theater at least once before with 1965’s “Passion Flower Hotel” and after “Lolita,” he went on to write commendable musical versions of “Billy Liar,” “The Little Prince” and Graham Greene’s “Brighton Rock.”

The score Lerner and Barry turned out for “Lolita, My Love” was, as it happens, a very good one, as can be heard on a widely circulated bootleg from its Boston tryout (the songs of which were issued at one point on the private Blue Pear label). Songs like “In the Broken Promise Land of Fifteen” and “Farewell, Little Dream” are quite beguiling.

And it’s clear that Lerner adapted Nabokov’s book will intelligence and flair. On the basis of the recording, John Neville as anti-hero Humbert Humbert, a teacher recovering from a nervous breakdown suffered at a girls school in Switzerland, Dorothy Loudon as Charlotte Haze, love-starved widow of Ramsdale, Vermont, Leonard Frey as oddball playwright Clare Quilty, and Denise Nickerson as nymphet Lolita all sounded terrific.

What seems to have been the major obstacle to public acceptance was, of course, the unsavory theme of a middle-aged man lusting after a pubescent girl, one (relatively) more palatable on the printed page than actually dramatized.

So the planned Broadway opening at the Mark Hellinger Theatre never happened, and kudos to York for giving the show its belated New York premiere. Playwright and Lerner aficionado Erik Haagensen has done a masterful job of sifting through and adapting the several extant Lerner scripts into one presumably incorporating the best of each, including the addition of a therapist to whom Humbert is narrating his story. Apparently, the therapist, Dr. Ray, was to be an off-stage male voice in Lerner’s post-Boston concept, but York’s excellent director Emily Maltby has made her an onstage presence, and a female one at that (Thursday Farrar) to render the narrative a bit more palatable to present-day audiences, especially as Dr. Ray is able to convey thinly veiled disdain at Humbert’s actions. The concept also helps underscore that  Humbert’s narrative is not necessarily truthful in all its particulars.

Robert Sella is quite superb in the marathon Humbert role. He seems to be channeling Neville with his crisp British accent, as well as singing his part of the score most attractively. As the object of his affection, Caitlin Cohn (actually 20-something, not 13, as was Ms. Nickerson in Boston), registers as remarkably convincing. And George Abud (“The Band’s Visit”) makes a dynamic Clare Quilty, the playwright character with designs on Lolita himself, delivering the opening “Going, Going, Gone” and the second-act “March Out of My Life” with welcome energy.

Jessica Tyler Wright, a solid musical performer, is rather too conventionally attractive, missing the requisite vulgarity of Charlotte with the character’s high-falutin’ airs and graces, as she sets her amorous cap on Humbert. But she puts over her songs, including her amusing paean to all things French, “Sur les Quais,” very well. The ensemble adds spark with such lively numbers as “At the Bed-D-By Motel” and “Buckin’ for Beardsley.”

Music director Deniz Cordell has done a fine job of reconstruction considering the lack of orchestra parts, and his piano accompaniment is first-rate throughout. Inevitably, without a full orchestra and all the elements of a full-scale production, the Mufti reading sometimes registers more as a play with songs, but it’s a fascinating one at that.

It’s worth catching this rarity while you can, unless you’d prefer to wait another half century until the next intrepid revival.

Print this post
Posted by Harry Forbes at 5:40 AM