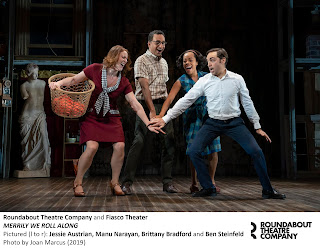 
If you are perhaps thinking that composer Stephen Sondheim and book writer George Furth’s backwards-in-time saga of three friends who go from mid-career disillusionment and rancor to youthful idealism and hope would somehow be diminished as performed by a puny cast of six, think again. In fact, Fiasco Theater’s staging is as rich and full an experience as any production I’ve yet encountered. (Fiasco made its name doing scaled-down performances of the Bard, and this is their second foray into Sondheim territory after 2015’s pocket sized “Into the Woods” also in tandem with Roundabout.)


Actually, decades ago, I saw a bare bones basement production as part of the Edinburgh Fringe festival, and it showed how effective a minimalist staging can be.


Derek McLane’s towering set, lighted by Christopher Akerlind, with shelves filled with props and with a cutaway upstage center allowing for an occasional change of vista, be it a palm tree lined street or a greenhouse (and at times, a backdrop of the Alvin Theatre where “Merrily” premiered), and Music Director Alexander Gemignani’s eight-piece orchestra, nicely amplified in Peter Hyklenski’s crystalline sound design, and one has the sense of a very full production. (Gemignani’s dad Paul was the music director of the original production.)


Some may miss Jonathan Tunick’s original charts, but Gemignani’s new arrangements and orchestrations struck me as delightfully fresh. And the intimacy of the overall approach ensures that the musical numbers register as naturally organic to the piece as the dialogue.


Narayan is a particularly outstanding Charley delivering his rapidfire and blistering “Franklin Shepard, Inc.” put-down with uncommon vitriol. Austrian’s Mary is sharply caustic as she wallows in her alcoholism. And Steinfeld, more sympathetic than some Franks, convincingly conveys the conflict in his character. Young is appropriately manipulative as she sets her cap on the budding young composer  And Bradford scores both as Frank’s latest mistress Meg in the opening scene and then as first wife Beth delivering a fine “Not a Day Goes By.” (Interestingly, a scene involving Frank and Beth living with her parents has been added from the Kaufman and Hart play.) Coffey is perfect as the soon-to-be-cuckolded producer and other roles.


Hal Prince’s original production was very much a misfire with its talented, but too youthful, cast wearing unbecoming sweatshirts identifying their characters. Since then, every production I’ve seen (York Theatre Company, the Menier Chocolate Factory, Encores), has sensibly gone for more conventional costuming and 30-something actors who can more convincingly age forward or back, and they have confirmed the quality of the show, with its now classic songs including “Good Thing Going,” “Now You Know,” and “Old Friends.”


Cleverly directed by Fiasco Co-Artistic Director Noah Brody, the narrative comes across with great clarity. Just so we all get it, the first flashback is done as if the players were in a film running backwards. When crowds are necessary, as in party scenes, Brody’s staging is wittily resourceful. Choreographer Lorin Latarro moves her players resourcefully, even at one point including an amusing homage to the bottle dance from “Fiddler on the Roof.”


The whole has been whittled down to 105 minutes sans intermission, and includes material added after the Broadway run such as “Growing Up” and “The Blob,” and according to the program notes, apparently some pre-Broadway cut material as well.


To paraphrase one of the show’s song titles, Fiasco’s reversioning of “Merrily” is very much a hit in my book. Highly recommended.

(Laura Pels Theatre in the Harold and Miriam Steinberg Center for Theatre (111 West 46th Street).212.719.1300, online at roundabouttheatre.org; through April 7)
Print this post
Posted by Harry Forbes at 8:27 AM