Frankie and Johnny in the Clair de Lune (Broadhurst Theatre) 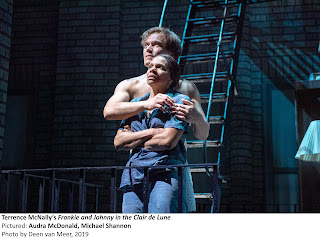 
Seventeen years after Edie Falco and Stanley Tucci memorably starred on Broadway as the unlikely middle-aged lovers of Terrence McNally’s 1987 play, Audra McDonald and Michael Shannon assume the roles in this latest well-judged production by director Arin Arbus. Though by virtue of the passing years, it’s become a period piece, the central story of two lonely souls making a connection has not dated.


Johnny’s a 47-year-old short order cook, and Frankie a 40-year-old waitress at a local eatery. The play begins with them in the throes of passionate lovemaking; there's full nudity, but it's dimly lit and discreetly staged by (“Intimacy Director”) Claire Warden. Their passionate one-night stand promises to turn into more when Johnny declares they’re each other’s perfect soulmates, and it’s not long before he’s talking marriage.


Frankie is afraid of intimacy and implores -- in fact, orders -- him to leave, declaring she wants to “stop worrying that (she’s) trapped in (her) apartment with a fucking maniac,” but Johnny holds firm. Frankie soon succumbs again to his aggressively persuasive charms, but there’s still plenty of conflict ahead before dawn breaks.


Though clearly mismatched in so many ways, Johnny touchingly searches for commonality. And they do, in fact, share several past experiences. They were both raised in Allentown. Both have scars (literal and figurative) from past relationships. And so on.


At one point, Johnny calls the classical music radio station to learn the title of a piece that pleased Frankie, and later, the DJ -- skeptical that he’s really been called by a real-life “Frankie” and “Johnny” -- plays what Johnny requests: the most romantic music ever written. The chosen piece turns out to be Debussy’s “Clair de Lune.".


The locale is Hell’s Kitchen in 1983 New York (realistically lived-in apartment set by Riccardo Hernández), and it’s wise that the period has been retained as cultural and societal mores have so greatly changed. Johnny’s stubborn assertiveness would not fly in today’s #MeToo environment, but to Shannon’s credit, especially given the actor’s hulking frame, he avoids creepiness, and we never fear Johnny will force himself on Frankie.


McDonald’s been convincingly deglamorized as the guarded, sardonic, and increasingly exasperated waitress, and one must admire again her desire (and ability) to transcend the musical roles on which she has built her career. She delivers her nostalgic recollection of her loving grandmother beautifully.


Shannon, ex-con that he admits to being, comes across as lovable, sincere, and gentlemanly as he spouts Shakespeare at the drop of a hat. The dynamic between Frankie and Johnny is, at times, remarkably similar to that between the central characters in Lanford Wilson’s “Burn This”: a brash, not-taking-no-for-an-answer suitor, and a strong-willed woman attracted to him against her better judgement.


Despite some repetitiveness in the second act, McNally’s play holds our attention particularly when the leads are embodied by two such dynamic actors.