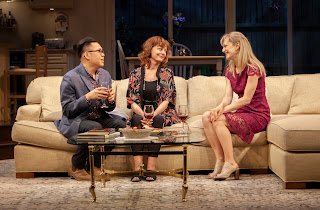 
A self-absorbed housewife Lorraine (Susan Sarandon in her first play since 2009’s “Exit the King”) -- with a chronically ill (offstage) mother, an ailing (multiple sclerosis), sour-tempered husband Bill (Daniel Oreskes), and an estranged leftist daughter Jenny (Tedra Millan) -- throws herself into amateur theatricals at the local Jewish Community Center, while her undocumented immigrant home health aide Ljuba (Marin Ireland) cares for the incontinent mother. When Ljuba asks Lorraine’s help in finding a husband so she can get a green card and bring over her daughter from Serbia, Lorraine sets her up with Ronny (Nico Santos), one of her cast-mates.


The show in question is “South Pacific” and Lorraine has been improbably cast as Bloody Mary, though the humor inherent of that politically incorrect situation is never explored. However, the Tonkinese character’s matchmaking neatly parallels Lorraine’s efforts on Ljuba’s behalf. The fact that Ronny -- gay and Asian --  is (also improbably) playing Lt. Cable in the show is another clever bit of thematic echoing.


Playwright Jesse Eisenberg has created an intriguing situation, and much of the dialogue is amusing, especially with Lorraine being the archetypal diva, and one who sees herself as universally beloved when that is most clearly not the cast, and Ljuba, the always eager-to-please, self-effacing servant. In their strangely co-dependent relationship, both have unhappy marriages and fractious relationships with their daughters.


The play takes a darker turn with the late-play entrance of the mother-hating daughter Jenny, and the play’s wrap-up is rather unsatisfying and not very believable, even though we’ve been given clues along the way. (At one point, Ronny sings a snippet of "Sunset Boulevard," and there are indeed parallels between Lorraine and Norma Desmond.) I think a less downbeat ending, while still scoring the same character points, might have been possible, but such is a playwright’s prerogative.


Still, it’s a treat to see Sarandon back on stage again, and she’s excellent, though she plays -- or has been directed by Scott Elliott to play -- her character in more muted a fashion than the part ideally would suggest, even if her narcissism is never in doubt. And there’s plenty of humor in her performance, as for instance, when she blithely insists other people’s troubles are as nothing compared to hers. And though she pays lip service to being a loving wife, her slapdash serving of Bill’s meals speaks amusingly to the contrary. On the other hand, Sarandon has a lovely reverie about Bloody Mary which manages to be quite poignant. And at other points, she demonstrates a genuinely softer, more sensitive side, making her actions in the play’s final minutes all the less plausible.


The chameleon-like Ireland, employing a convincing Slavic accent, is an upbeat delight throughout, etching yet another memorable portrayal. Oreskes says little, but he’s a powerful presence. Millan makes the most of her angry foul-mouthed scene. And Santos is funny and real in his scenes.


Derek McLane has designed an attractive living room/kitchen set with theater posters on the wall (e.g. “Pippin,” “Joseph & the Amazing Technicolor Dreamcoat,” etc.), and Clint Ramos’ costumes are ideal. Brett Macias’ music supervision includes chunks of the original cast and soundtrack recordings of “South Pacific,” demonstrating yet again how pervasive and influential the Rodgers and Hammerstein canon has become.