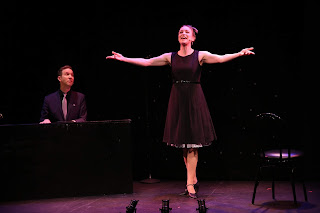 
“I am not Julie Andrews,” declares Sarah-Louise Young at the start of her two-act tribute to Julie Andrews, precluding any odious comparisons. In any event, the show -- written by Young “with contributions from” director Russell Lucas -- is not an impersonation, but rather a loving homage from a lifelong fan.


Young first saw Andrews in a concert at the O2 auditorium in 2010  when the beloved star of “Mary Poppins” and “The Sound of Music” was attempting a musical comeback after the botched throat operation that, for all intents and purposes, ended her singing career. The press reported that the fans were disappointed, and Young admits “She didn’t sound the same,” but her adoration remained undiminished.


Tracing Andrews 1935 birth in Surrey, the nurturing of her voice by stepfather Ted Andrews to her early Broadway triumphs (“The Boy Friend,” “My Fair Lady,” and “Camelot”) to her Hollywood blockbusters, albeit with a public that would not accept her out of the nanny/governess roles, to the tragic loss of her voice, Young covers a lot of territory.


Along the way, Young sings most of the expected hits including “Do-Re-Mi,” “The Lonely Goatherd,” and “A Spoonful of Sugar.”


She also impersonates many of the people or prototypes in Julie’s life (i.e. a voice teacher, a Pathe news reader, a music hall performer). An adept mimic (Young’s Audtrey Hepburn for one is spot-on), she oddly chooses to affect some very peculiar accents for “My Fair Lady” director Moss Hart, and Rodgers and Hammerstein when a simple search on YouTube could easily give her the real thing. And there’s a little too much extraneous Liza Minnelli whose main connection with Andrews was replacing her for a short period in “Victor/Victoria.”


Accompanied very gracefully by Michael Roulston on the piano, most of the renditions are straight with an occasional off-beat arrangement such as “Feed the Birds.” She’s got an excellent voice which can encompass show tunes like “Le Jazz Hot” and the more soprano-like demands of “I Could Have Danced All Night.”


Along the way, Young ventures away from the obvious hits to such numbers “Say a Prayer for Me Tonight” (cut from “MFL”), “Could I Leave You?” from Andrews’ late return to the stage, “Putting It Together,” “I’ll Give You Three Guesses” from “Darling Lili,” and “The Physician” from “Star!”  As Young professes not to care much for “Camelot,” it is Roulston who is left to offer a very warmly vocalized “How to Handle a Woman.”


The script avoids the nitty gritty of Julie’s paternal parentage, as detailed in the lady's autobiography, but covers Andrews’ divorce from Tony Walton, her career challenges, the not-altogether-positive “change in direction” under the influence of second husband Blake Edwards, and the aforementioned loss of voice, the last symbolically mimed in an extended sequence to the strains of “The Rain in Spain.”


All in all, the script does cram a good deal of biographical incident in its breezy way, so Young clearly knows her idol.


Young is extremely personable, and her enthusiasm for her subject is infectious. She expresses what registers as genuine awe and excitement when audience members tell her what they’ve seen the lady in person. (Several mention “Victor/Victoria,” which particularly excites Young, though this was arguably the nadir of Andrews’ stage work.)


Outfitted in a simply frock for act one, she emerges in a rather eccentric multi-colored concoction in the second (costumes by Anna Braithwaite), which she finally sheds in modest homage to Andrews’ torrid striptease in “Darling Lili.”


Returning near the end to the night of the O2 concert, Young offers a gentle “Edelweiss,” wrapping up the evening on a poignant note before returning for a good natured audience singalong.