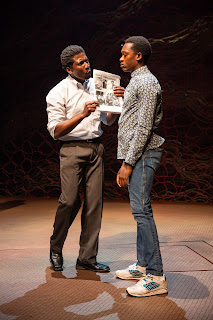 
British writer Chris Urch’s play -- which premiered at the Manchester Exchange in 2015 before transferring to London the following year -- is based on the horrific 2010 reports of a Ugandan newspaper, “The Rolling Stone,” which published the names, photos, and addresses of alleged homosexuals inevitably leading to violence before it was shut down.


As we learn from a program note, homophobia (“Kuchu” being the disparaging word for gay) -- dating back to British colonial days there -- was on the rise largely due to American Christian missionaries influence in the churches, though that interesting aspect is not really explored here.


So here we have 18-year-old Dembe (Ato Blankson-Wood) engaged in a covert affair with a visiting Irish-Ugandan doctor Sam (Robert Gilbert), as Dembe’s brother Joe (James Udom) stands poised to assume the role of pastor. Joe’s appointment is largely due to the influence of the formidable church elder known as Mama (Myra Lucretia Taylor) whose daughter Naome (Adenike Thomas) -- a potential bride for Dembe -- had mysteriously stopped speaking six months before.


It is revealed that the family is in grave financial straits, and only one of Joe’s siblings will be able to go to medical school. Given the inherent societal exism that would appear to be Dembe, rather than their sister Wummie (Latoya Edwards) who, complicating matters, intuits the truth about Dembe’s sexual leanings leading to further tension.


And when the titular paper predictably gets around to naming Dembe, there can only be emotionally explosive results. Throughout, there are thematic similarities to Arthur Miller’s “The Crucible,” and a modern-day witch hunt.


All the performances are powerful and bear the ring of authenticity, Ugandan accents and all. Udom’s fire and brimstone sermon about homosexuality directed towards the audience as “congregation” is particularly electrifying. And Taylor skillfully navigates her character’s likable maternal concern with a chilling pious hypocrisy.


Director Saheem Ali sustains the tension throughout, though occasionally there’s a slackening of interest due more to Urch’s occasionally contrived text. So, too, the open-ended conclusion is a bit of a letdown. But these are minor carps in a consistently absorbing narrative, well worth your time.


Photo by Jeremy Daniel: James Udom and Ato Blankson-Wood as siblings Joe and Dembe in Lincoln Center Theater's THE ROLLING STONE.
Print this post
Posted by Harry Forbes at 1:14 PM