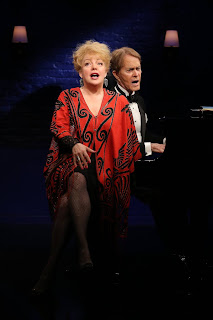 
As anyone with even a passing familiarity with New York’s cabaret scene knows, Steve Ross and KT Sullivan are past masters at putting over the songs of Noël Coward. And they’ve done so --  memorably -- on numerous occasions at venues large and small over the decades.


Put them together, with a knowing script by Coward biographer Barry Day, and the resulting alchemy should be no surprise, particularly when guided by the sensitive touch of Irish Rep Artistic Director Charlotte Moore who, based on the company’s frequent flirtings with Coward, proves once again she knows a thing or two about The Master.


In the ultra-intimate downstairs studio space of the Irish Rep, the duo begins in artfully low-keyed fashion, relating the story of Coward’s life in broad strokes, as taken from his copious extant correspondence, from early days touring the provinces through West End and Broadway triumphs, managing, along the way, to incorporate many of the hits (“Mad About the Boy,” “If Love Were All,” “I’ll See You Again”) and a few rarities (“I’ll Remember You,” “Never Again,” “I Wanted to Show You Paris,” “Together with Music”) as well.


At first, the tone is so laid back and their delivery so conversational that audience stays silent as applause might seem intrusive, but that doesn’t last long, as the show builds in pizzazz and emotional power over its roughly 90 minutes.


There an overview of all the ladies in Coward’s life, starting with his doting mother Violet who saved every one of his letters from the get-go. Most of them are impersonated by Sullivan who skillfully runs the gamut from Marlene Dietrich, Mary Martin, Yvonne Printemps, to Gertrude Lawrence. Some time is spent on Noel and Gertie’s warm friendship dating back to childhood, and her surprising death at the time of “The King and I.”


The excerpted letters and alternately funny and touching. A prime example of the former is Coward’s recounting of an unlikely proposal from Greta Garbo.


Sullivan really cuts loose with “Why Do the Wrong People Travel,” giving it plenty of originator Elaine Stritch gusto, and later belts “World Weary” to a fare-thee-well. Ross does his peerless rendition of “Mrs. Worthington,” and strikes a poignant note with “I Travel Alone.”  And the two have a ball with “Bronxville Darby and Joan, and a London sequence, utilizing the songs in Tessie O’Shea’s cheery Tony Award-winning sequence from “The Girl Who Came to Supper.”


The Master would have been pleased with this loving tribute.

Photo by Carol Rosegg. Print this post
Posted by Harry Forbes at 10:50 AM