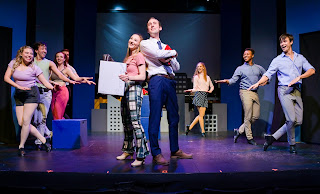 
Cy Coleman and Dorothy Fields’ 1973 musical adaptation of playwright William Gibson's 1958 “Two for the Seesaw” is being accorded a rare revival on Theatre Row.


The production marks the launch of a plucky new company dedicated to small scale revivals from one of Broadway's latter-day Golden Ages.


The fledgling group’s premiere effort, under the direction of company Artistic Director Robert W. Schneider, is an impressively polished one. Originally, besides the strengths of the show’s stars Michele Lee, Ken Howard, and Tommy Tune, the show’s greatest accolades had to do with Michael Bennett’s staging and choreography and the imaginative and innovative projections of New York. Neither of those attributes are on view here, although Ryan J. Douglass has designed an attractive New York skyline backdrop and Caitlin Belcik’s choreography is impressive for the intimate stage space.


The musical closely follows the plot of Gibson's play (with much of his dialogue retained), which originally starred Henry Fonda and Anne Bancroft and was later filmed with Robert Mitchum and Shirley MacLaine in gritty black and white and with a melancholic jazz score by Andre Previn. The two-hander would have seemed an unlikely candidate for musicalization, as it’s a bittersweet comedy-drama about two lonely mismatched souls -- she divorced, he on the verge -- who briefly find and bolster each other.


They are dancer Gittel Mosca (Stephanie Israelson), by her own admission “not very smart,” and living a bohemian lifestyle, and straight-laced Nebraska lawyer Jerry Ryan (Andy Tighe). Gittel’s insecurities and sense that the relationship isn’t quite right almost scuttles the relationship near the start, but a serious ulcer attack (hers) reunites them.


Gittel’s choreographer friend David -- the part originated by Tommy Tune who received a Tony award for his work -- is nicely played here by J Savage. Though the relationship is far from smooth sailing, you find yourself rooting for them anyway.


“Seesaw” was both praised and criticized for its schizophrenic nature, part intimate drama, part splashy musical. Though there are character songs for the two leads (Cy Coleman wrote the score, Dorothy Fields, in her last show, the lyrics), the big production numbers really have precious little to do with the central plot. Those are well done here, including David's dream finale, “It's Not Where You Start,” and the show’s most durable tune, which is put over with requisite pizzazz by Savage.

Tighe is solid as Jerry and delivers his songs very appealingly, including “You’re a Lovable Lunatic” and “We’ve Got It,” very nicely vocalized. Israelson balances abrasiveness and charm, though at first it seemed as though the former attribute was going to win the day. By the time she got to her 11 o’clock number, “I’m Way Ahead,” we were in her court.


She plays Gittel with a heavy Bronx accent and reminds me of Edie Falco with a bit of Barbra Streisand thrown in for good measure, and has the show’s other best known song, the self-deprecating “Nobody Does It Like Me,” doing well with it and her comic follow-up “Welcome to Holiday Inn.”


Memories of "Musicals Tonight," producer Mel Miller's group which folded last year after an impressive run of 100 productions, are inevitable. Same venue. Similar presentation style. Miller was present at the reviewed performance, and was acknowledged warmly by Executive Producer Jim Jimirro before the show, prompting a warm, well-deserved ovation. (Jimirro also took the opportunity to tout a series of special talkbacks that will accompany many of the performances.)


Those familiar with the cast album or the show itself, will note two missing first act songs: “Spanglish” and “Ride Out the Storm.” The latter is replaced here by “The Party’s On Me,” the song written for the original national tour which starred Lucie Arnaz and John Gavin.


Under the direction of Grant Strom, the numbers are in good hands, and the onstage ensemble of piano, bass, and xylophone, make for an attractive musical palette,.


Matthew Solomon has designed the evocative 1970’s costumes. The show is very much a product of that era, and wisely, there’s been no updating. (Longtime theatergoers may remember that Mayor John Lindsay made a well-publicized cameo appearance in the show.)


The production will be followed by Richard Rodgers’ solo effort, “No Strings” (2/27-3/8) and then by the Edward Kleban bio musical, “A Class Act” (3/12-3/22) both of which should adapt well to the intimate J2 Spotlight approach.


Photo credit: Russ Rowland.
Print this post
Posted by Harry Forbes at 10:13 AM