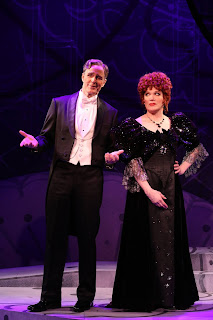 
That consummate man of the theater, Charles Busch, has come up with a superb parody that both lovingly spoofs and pays respectful homage to those self-sacrificing women’s films of the 1930s (“The Sin of Madelon Claudet,” “Stella Dallas,” etc.), along the way brilliantly incorporating every beloved trope of the genre. And, as the titular heroine, he manages to channel everyone from Hayley Mills to Marlene Dietrich to Mae West and Bette Davis.


As Lily climbs from orphan girl to glamorous cabaret headliner to jailbird to madam and down-and-out honky tonk singer, she, all the while, remains a loving mother to a daughter who doesn’t know her. Busch proves, as he’s done so often before, a masterful mimic and farceur. He is surrounded by a sterling cast of performers who match his facility for period spoofing. I saw the play in its showcase production at Theater for the New City two years ago, and good as everyone was then, the cast has now fine tuned their roles to perfection.


The whole is directed by Busch’s regular collaborator, Carl Andress who is, of course, so seamlessly attuned to Busch’s sensibilities.


We see how Lily first came to the San Francisco whorehouse run by her Aunt Rosalie (the deliciously chameleon Jennifer Van Dyck, in one of four hilarious roles). We soon meet the ne’er-do-well swindler Blackie Lambert (an oily Howard McGillin), and the brothel’s bookkeeper (soon to be Lily’s first lover) Louis (Christopher Borg, who throughout the evening, matches Van Dyck in rib-tickling versatility). The 1906 earthquake, in short order, leaves the now pregnant and man-less Lily in dire straits once again.


Later framed for a crime she didn’t commit, she loses her daughter Louise to a wealthy Nob Hill couple (Borg and Van Dyck), but finds success as a notorious madam now calling herself Treasure Jones.


Louise grows up to become a world famous opera star, but Lily nobly keeps her distance.


What makes these Busch spoofs so much more than extended “Carol Burnett Show” take-offs, is the real heart and genuine emotions with which they are written and played. When Lily’s at rock bottom, for instance, she sings a brave version of “A Shanty in Old Shanty Town,” it’s a genuinely touching moment transcending spoof. But there are many such moments.


So, too, the play is very well plotted in a manner that might give that master Victorian melodrama writer Dion Boucicault a run for his money. 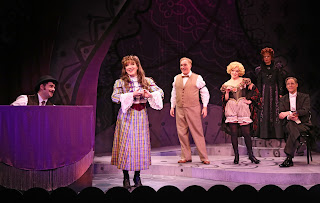 Jessica Jahn and Rachel Townsend’s costumes are great fun, and the former really goes to town with Busch’s flashy getups. Townsend’s creations help Van Dyck and Borg transform from one wildly divergent character to another.


Van Dyck’s impersonation of the diva -- miming hilariously to “Sempre Libera” from “La Traviata”  -- and feeling a mystical connection to the mother she never knew, is a show in itself as she affects posh Greer Garsonish tones. She also plays a haughty baroness. Borg, for his part, plays a lecherous baron, an Irish priest, and an Italian impresario. Anderson, a stylist vocalist excelling in repertoire of an earlier era, proves just as adept at adopting the acting style of bygone stars here channeling Joan Blondell and others of that ilk as the good-hearted tart. And McGillin, as noted, impressively nails the suave rake.