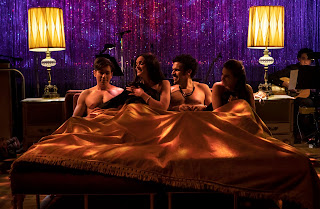 
Composer Duncan Sheik’s musical version of Paul Mazursky’s 1969 box office smash has a lot going for it -- a talented cast, an easy-on-the-ears score, and a book that totally respects the source material -- but, at the end of the day, one wonders about the wisdom of adapting the film for the stage at all, much less adding songs to it.


Those who just have a general idea of the film’s plot may assume the story was a free-wheeling 1960s sex farce. In fact, it’s a rather serious-minded satire of the mores of the sexual revolution of the time, albeit with plentiful laughs. Mazursky himself considered it a “comedy of manners” about love and affection.


The plot concerns the couple Bob and Carol who attend an Esalen-like enlightenment group as filmmaker Bob is planning a documentary about the group. (Mazursky had read an article about Esalen in Time magazine, and was inspired to attend with his wife, but there the real-life parallels to the plot ends.)


Bob and Carol learn how to get in touch with their feelings during encounter therapy, most especially Carol who seems to feel especially liberated by the weekend of self-examination. And when they return home, the couple tries to share their New Age enthusiasm with close friends Ted and Alice. Shortly after, Bob confesses to Carol about a brief affair in San Francisco, and Carol applauds his fearless honesty rather than chastising him. But when she shares this “happy” news with their friends, Alice, in particular, is appalled at Bob’s infidelity and the couple’s infuriatingly casual attitude shakes her to the core. This sets up a conflict with the couples that comes to a head when they take a vacation to Las Vegas.


Jonathan Marc Sherman’s book adheres very closely to the screenplay by Mazursky and Larry Tucker, and all the famous scenes from the film are here -- and done quite well, too. The four leads comprise the main company, while Grammy-winning singer-songwriter Suzanne Vega (“Luka”) provides the voices for all the other characters (the Institute team leader, Alice’s therapist, and so on) as the nominal “Band Leader.” When more bodies are needed onstage, as for instance in the opening encounter session at the Institute, audience members are recruited to join the playing area as silent participants, a rather awkward device, I felt.


Under The New Group Artistic Director Scott Elliott’s assured helming, the talented cast -- including Joél Peréz (“Fun Home”) as Bob; Duncan Sheik alumna Jennifer Damiano (“Spring Awakening,” “American Psycho”) as Carol, Michael Zegen (Joel Maisel on “The Marvelous Mrs. Maisel”) as Ted; and Ana Nogueira (“Engagements”) as Alice -- excel in all departments, and look good in designer Jeff Mahshie’s underwear in which they spend a good part of the one hour and 45 minute intermission-less evening. Nogueira is especially funny replicating the scene in which Alice wants no part of sex after Carol’s stunning revelation about Bob. Still, for all the talent here, it can’t be said they can erase the memory or convey a comparable charisma to Robert Culp, Natalie Wood, Elliot Gould and Dyan Cannon in the film. (A TV spin-off in 1973 with Robert Urich and Anne Archer fizzled and was pulled from the air after only seven of its 12 episodes aired.)


As noted above, one of the show’s strongest assets is its fidelity to the source material and its attempt to capture the mood of the piece, right up the film’s surreal “What the World Needs Now” ending, here mirrored with a song called “What’s Up With Love?” All in all, Sheik has composed a pleasantly jazzy score, and the song presentation is highly stylized. When a character is inspired to break into song, a microphone is either handed over wherever they happen to be on the stage, or the actor actually joins the four musicians upstage and takes a place behind a standing mike.


This serves the purpose of keeping the dramatic aspects someone separate from the musical, but more often than not, the songs feel unnecessary, despite some catchy tunes (like Ted’s “A Little Misbehavior”), and the clever rhymes penned by lyricists Sheik and Amanda Green, such as Alice’s “though you’re unscientific, a bit soporific, I feel almost - huh - beatific.”
Near the end, there’s a song, sensitively vocalized by Vega, that skillfully clears up the ambiguity of the film’s ending, one of the few cases of a song helpfully elucidating the action.


Derek McLane’s set, lighted by Jeff Croiter, includes some movable furniture in the downstage playing area (including, of course, a bed), a bandstand and beaded curtain behind.


Jason Hart, also credited with the vocal arrangements, is the adroit music supervisor.