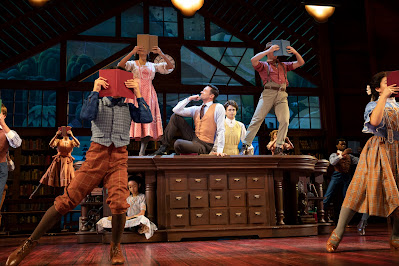 New Yorkers have been passing the humongous Winter Garden orange and blue billboard touting Meredith Willson’s classic musical for the many long months of the pandemic shutdown, Now it’s opened at last with its gold-chip stars Hugh Jackman and Sutton Foster intact, not to mention a large and especially lustrous supporting cast.

The city’s last major revival -- a very good one directed by Susan Stroman with Craig Bierko (eerily channeling originator Robert Preston in his vocals) and the late Rebecca Luker -- closed in 2001. But who could resist mounting it for Jackman who, as he has said, has had a lifelong ambition to play con artist Harold Hill?

I do feel that, on the whole, the Stroman production managed a more satisfying mixture of a fresh staging coupled with more fidelity to the heart of the traditional staging. Here, the creative team, including director Jerry Zaks and choreographer Wayne Carlyle (the team that staged the Bette Midler “Hello, Dolly!” revival, along with set designer Santo Loquasto), have determinedly set out for a revisionist approach. While they haven’t radically departed from the spirit of the long-running, award-winning 1957 original, the production does have a decidedly different feel.

For one thing, this is probably the most stylized, dance-heavy “Music Man” we’ve ever seen. The long-limbed Jackman is at least up to the task, gracefully executing all of Carlyle’s fancy footwork. And Foster as Marian, not traditionally a dancing role,  now gets to dance in the big Act 2 opener, “Shipoopi,” and a specially added tap dancing finale. Some of the choreography is admittedly clever, like the impressively coordinated book tossing in “Marian the Librarian.” But much of the staging seems overly busy. In his work for “Dolly,” Carlyle was at least adhering very closely to the original Gower Champion template.

Throughout, Jackman proves himself incredibly lithe and athletic. And he certainly has the measure of the part. Rather like Harry Hadden-Paton in the “My Fair Lady” revival, he sings the role more than traditional Hills, rather than using the more speak-sing delivery as it was written. Only in the climactic footbridge scene where he and Marion finally click and duet on “Till There Was You” and “Goodnight My Someone,” does his voice take on a somewhat pinched and nasal quality.

I didn’t care for the heavily stylized treatment of Hill’s opening “Ya Got Trouble.” Jackman’s dancing and the coordinated movements of the ensemble were well executed but seemed out of keeping with the dramatic situation of Hill subtly conning the Iowa townspeople.

Foster is costumed and bewigged as the archetypal “spinster” of yore, Marian. She brings not only the aforementioned dancing skill, but deft comic timing, and impressive vocalizing, missing only the easy lustrous high notes of most past Marians. She and Jackman are a good match physically, and when she finally drops the brittle veneer, her tenderness to Jackman is most touching. 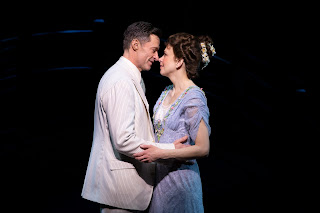 A definite plus here is the deluxe casting of such dramatic heavyweights as Jefferson Mays as Mayor Shinn playing like a bumbling Frank Morgan, Jayne Houdyshell as his imperious wife Eulalie, Marie Mullen as Mrs. Paroo, all superb. Also outstanding are Shuler Hensley (who, interestingly, was Jud to Jackman’s Curly in the National Theatre “Oklahoma!”) as Marcellus, and Remy Auberjonois, the salesman determined to unmask Hill as a fraud. He gives his late scenes real dramatic power. Benjamin Pajak is an adorable lisping Winthrop. And there’s good work, too, from Gino Cosculluela and Emma Crow as young lovers Tommy and Zaneeta.

There’s been some unnecessary fiddling with the lyrics, most especially “Shipoopi,” with a feminist revision of the lyrics extolling those gals who play hard to get.

Even with tweaks, “The Music Man” is, as ever, a fine show, and a radically innovative one too. Those who label it old-fashioned are missing the great achievement wrought by Meredith Willson who wrote music, lyrics and book. It’s not for nothing that the show trumped “West Side Story” in the Tonys.

Despite the attempts to purge the book of anything that would offend modern-day sensibilities, the show is still a delight, especially with megawatt talents like Jackman and Foster at the helm. And the audience responds with rapturous enthusiasm.

Print this post
Posted by Harry Forbes at 11:16 AM