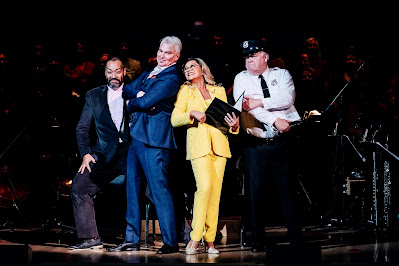 For a musical that flopped so spectacularly back in 1964, “Anyone Can Whistle” has certainly shown remarkable staying power. The one-night-only performance at Carnegie Hall under consideration here is its second such gala presentation in that hallowed house; the first was the 1995 GMHC benefit with Madeline Kahn, Bernadette Peters, and Scott Bakula, narrated by original star Angela Lansbury no less.

Since then, there’s been an excellent 2010 Encores presentation with Donna Murphy, Sutton Foster, and Raul Esparza; a Ravinia Festival outing in 2005 with Audra McDonald, Patti LuPone, and Michael Cerveris; and a recently released two-disc CD from Jay Records with Julia McKenzie, Maria Friedman, and John Barrowman. Much credit for the show’s endurance must go to record producer Goddard Lieberson for recording the show at Columbia despite the show’s cool critical reception and tepid box office.

This week’s production headlined Vanessa Williams as villainous mayoress Cora; Elizabeth Stanley as idealistic Nurse Fay Apple; and Santino Fontana as the quixotic Dr. Hapgood, with orchestra under the commanding leadership of Artistic Director Ted Sperling. In his opening remarks, Sperling praised the late Stephen Sondheim as a “mentor, colleague, and friend.” The composer, he said, gave him his first Broadway break in the original production of “Sunday in the Park with George.” 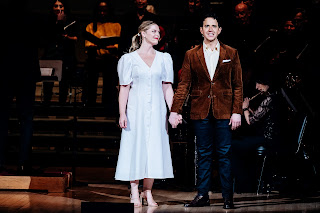 Beyond the production being a wonderfully fitting tribute to Sondheim so soon after his passing, it was clear that the show was an ideal fit for MasterVoices as there’s an abundance of orchestral music, with plenty of opportunity for choral work.

Experimental though the structure of the show may be, or once was, the score registers as one of Sondheim's most traditional in the Broadway mode. It’s the absurdist and cynical storyline that lacked appeal to audiences back in the day and, in spite of its legendary status, arguably still does now.

The plot has to do with Cora needing something to reinvigorate her bankrupt town with tourists and earn the people’s love. A (fake) miracle involving water from a rock provides the perfect gimmick for her and her principal henchman Comptroller Schub (Douglas Sills, excellent as always). When idealistic Nurse Fay Apple brings 50 of her “cookies” from the local asylum to the rock to effect a cure, Cora and Schub fear disclosure, and try to block her efforts. Fay joins forces with J. Bowden Hapgood, a new doctor in town (though, as we learn later, he’s, in fact, a “cookie” too). 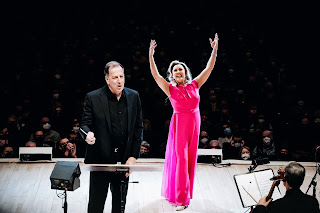 Themes of conformity versus nonconformity, idealism, pragmatism, romanticism and so on are all part of Arthur Laurents’ fair-to-middling script, mercifully abridged with narration engagingly read by Joanna Gleason. But amidst all this, the songs are some of Sondheim’s very best. Cora’s Kay Thompson-inspired numbers: “Me and My Town” and “A Parade in Town”; Fay’s yearning “There Won’t Be Trumpets” and wistful  “Anyone Can Whistle”, and Hapgood’s rapid-fire “Everybody Says Don’t” and touching “With So Little to Be Sure Of.”

The cast was enthusiastically cheered by the sold-out house, but Stanley seemed to come out strongest on the applause meter with her incisive and sensitive delivery. She made every one of her songs special, and was delightful in her disguise as the “Lady from Lourdes” sent to investigate the veracity of the “miracle” with red wig, crimson gown and a French accent. And only in this outlandish getup could her character overcome inhibitions and succumb to Hapgood’s romantic attentions.

Fontana was predictably solid dramatically and musically, and rendered his two big numbers very beautifully, also duetting delightfully with Stanley on the faux French “Come Play Wiz Me.” Their French dialogue leading up to the song was amusingly framed with surtitles. (In the original production, the title machine was apparently an ongoing source of annoyance as it was continually breaking down.)

Williams - an accomplished Sondheim interpreter (e.g. “Into the Woods,” “Sondheim on Sondheim”) - was sensibly cast as Cora, but I felt her delivery was a bit soft-grained on this occasion, though she sang smoothly as ever, and deftly sparred with Stanley in the catty (and, like “Trumpets,” originally cut number)  “There’s Always a Woman.”

There was first-rate work too from Eddie Cooper as Treasurer Cooley, Michael Mulheren as Police Chief Magruder, and Mark Spergel as Dr. Detmold. 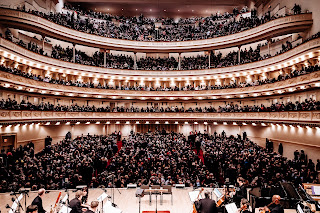 The whole was stylishly directed by Sperling who led the MasterVoices chorale and orchestra with his customary expertise and flair.

Print this post
Posted by Harry Forbes at 9:15 AM