The Only Girl (VHRP Live!) 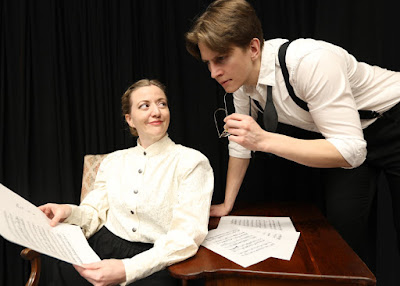 For a work that, for all its cherishable qualities, can hardly be said to rate as one of Victor Herbert’s biggies such as “Naughty Marietta” or “Babes in Toyland,” it is all the more extraordinary that the recent presentation by Victor Herbert Renaissance Project Live! was, in fact, the second New York production in seven years.

The 2015 LOONY production was, in many respects, a more than decent one, with a chamber orchestra ably conducted by Gerald Steichen, and a good cast roughly comparable to the one at hand. It even resulted in an enjoyable CD from Albany Records. However, both that production and recording were undercut by a misguided if well-intentioned new book.

Leave it to VHRP and its artistic director, Alyce Mott, to set things right by presenting the show, some edits notwithstanding, in its original three-act form with Henry Blossom’s original narrative intact.

What made “The Only Girl” so singular in 1914, delighting its contemporary critics, was its unique structure as a play with music. There are no extended finales or recitative or choruses: just songs where the plot allows them, and those songs are in a musical comedy vein, not in Herbert’s more familiar operetta style. The show was based on Helen Kraft’s 1912 play “Our Wives,” in turn adapted from an 1897 German comedy, “Jugendfreunde” by Ludwig Fulda. Critics were unanimously pleased with the Blossom-Herbert adaptation. And interestingly, “The Only Girl” was one of the few Herbert works to find favor in London.

The story concerns Alan Kimbrough (aka “Kim”), a writer in desperate search of a composer with whom to collaborate on his upcoming operetta. When he hears the melodious strains of the show’s evergreen hit, “When You’re Away,” from the apartment below, he’s sure he’s found his man, only to soon learn the melodist is, in fact, a woman, Ruth Wilson (Joanie Brittingham). He and his three buddies nicknamed Corksey (Andrew Buck), Fresh (Jack Cotterell), and Bunkie (Jonathan Fox Powers) have recently sworn to abjure women.  While Kim’s too much of a male chauvinist to entertain the notion of collaborating with a woman, necessity propels him to overcome his reluctance, so he and “Wilson,” as he declares he will call her, will be strictly business partners, and work like two "machines." 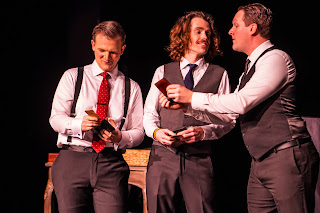 Of course, it isn’t long before his three friends break their vows and fall for women who, in short order,  become their wives: Jane (Alexa Devlin), Margaret (Sara Law), and Birdie (Hannah Holmes), and pretty bossy, domineering ones at that! By the third act, after much farcical business, it can’t be too much of a spoiler to reveal that Kim and Ruth finally recognize their mutual attraction.

Adding some comedy along the way are the antics of showgirl Patrice (aka Patsy) (Emily Hughes), who hopes for a role in Kim’s new operetta, and her actress girlfriends Ruby (Barbee Monk) and Violet (Mariah Muehler). (Even in this semi-staged performance, I did rather wish they, showgirls or not, had worn long dresses more suggestive of the period.) But they sang well, and at one point, Muehler executed a neat bit of juggling with scarves.

The second act has a lot of silly business involving Margaret taking shrill offense with the other wives when they gossip about her possibly dying her hair or wearing a wig. 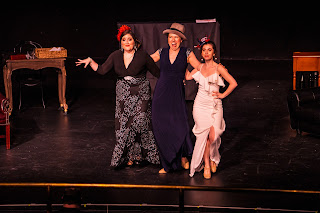 With all these shenanigans involving the married couples and the showgirls, what should be the central story of Kim and Ruth gets rather shoved aside, so it’s no wonder LOONY had attempted to correct that imbalance. But I much prefer the authentic approach we had here. And we can appreciate how innovative the work must have seemed in its day.

The songs, when they come, are delightful. Among the tuneful highlights are the sextet for the three couples, “Connubial Bliss”; the husbands’ “When You’re Wearing the Ball and Chain” lament; the wives rebuttal  “Why Should We Stay at Home and Sew?”; and the rousing march, “Here’s to the Land We Love, Boys,” all very well delivered. It’s a rather odd circumstance that soubrette Patsy has more songs than Ruth, but Hughes had the voice to put them over.

Under the sure baton of Musical Director Michael Thomas, the six-piece New Victor Herbert Orchestra played a reduction, not an adaptation (as Mott was careful to point out in her opening remarks), of Herbert’s orchestration. From the sprightly overture onwards, it was clear we were, as ever, in excellent musical hands.

The score seemed complete, only missing “Antoinette,” a brief number for a deleted showgirl character Renée. 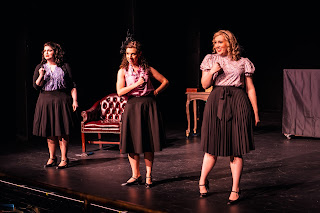 VHRP regular Brittingham performed the big number nicely, but positioned as she was, upstage behind an upright piano, the song’s effectiveness was somewhat diminished. Devlin got the show’s second major waltz number, “Tell It All Over Again,” also starting behind the upright, but then at least, moved downstage to finish it. She and Holmes, the latter channeling Julie Halston, were particularly amusing as the pushy wives.

Sapp seemed to have the lion’s share of dialogue on the male side and handled it exceedingly well, perhaps his most impressive outing yet for VHRP.  In fact, all the men were strong dramatically and vocally, starting with their close harmony rendition of “Be Happy Boys, Tonight.”

I must not neglect the contribution of veteran performer David Seatter who, in the mostly non singing role of the butler Saunders, made his every moment count, as apparently did the role’s creator John Findlay.

The audience at my performance responded warmly when Kim and Ruth finally got together at the end to sing the tender “You’re the Only One For Me.” And indeed, this inaugural production at VHRP’s new home at the Theater at St. Jeans attracted a good-sized, enthusiastic crowd. It's wonderful the company now has a proper orchestra pit and traditional stage, rather than having to perform against the backdrop of a church sanctuary.

Though not a dancing show, Andrea Andresakis supplemented Mott’s direction with some effective staging of the group numbers.

For those interested in hearing the score, there’s  the aforementioned Albany recording, and also a twin piano version from Comic Opera Guild with the songs in authentic order.

Below: Photos by Rachel Monteleone / @MontePhoteaux

Print this post
Posted by Harry Forbes at 7:50 AM