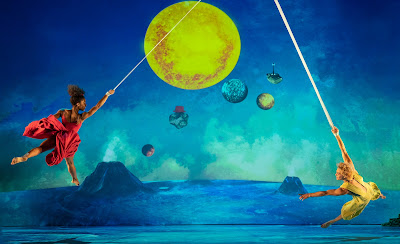 Make no mistake. Considerable artistry has gone into the large-scale adaptation of Antoine de Saint-Exupéry’s  ever-popular 1943 story. But there’s no denying this French import, which has already played Paris, Sydney, and Dubai,  is a singularly odd candidate for Broadway.

Neither a play nor a musical, the production most closely resembles a ballet, albeit one with some Cirque du Soleil-type aerial stunts. There are a couple of songs, but mostly dialogue recitation rather tiresomely delivered by librettist and co-director Chris Mouron in heavily French-accented English (titles helpfully supplied on the side of the stage).

At first I thought the androgynously outfitted Ms. Mouron would be voicing the titular character which would make sense for a child’s voice, especially as The Little Prince is, in fact, portrayed by the strapping adult Lionel Zalachas in a yellow jumpsuit. But no, Mouron also speaks for The Aviator (Aurélien Bednarek), and all the others encountered by The Little Prince in his interplanetary travels. Besides the monotony of the conceit, the narration and dialogue excerpts hardly serve to make the plot comprehensible to anyone unfamiliar with the story.

The program breaks down the “scenes” by character but unless you’re consulting the running order in the dark, you might still, from time to time, find yourself at a loss.

Upon reflection, the production might have been a more logical fit for Lincoln Center or even BAM. In an earlier age, a producer like David Merrick would occasionally import an international success, but if he were here today, I’m sure he would think twice about the commercial possibilities of this particular property. As it is, there were walkouts at my performance. Nor did I see many children in attendance (it was an evening performance), but I would guess that even kids familiar with the book would fidget.

Though there have been countless adaptations of Saint-Exupéry’s novella, I believe the last Broadway attempt must have been the notorious 1982 flop, “The Little Prince and the Aviator,” with a score by John Barry and Don Black, which closed without opening after 20 previews.

Alan Jay Lerner and Frederick Loewe had, of course, written a very appealing score for Stanley Donen’s 1974 movie version which was not a success either. (Disappointingly, a recent York Theatre semi-staged presentation of the Lerner & Loewe songs was scrapped over a pesky rights issue.) On the other hand, Rachel Portman’s commendable operatic version won deserved plaudits. And the BBC filmed version aired on PBS, proved it is possible to make a viable stage property from the delicate source material.

The strongest elements of the production at hand are those impressive aerial stunts (Flying by Foy), the corps de ballet (choreography by Anne Tourné who also directed), and the non-stop projections by Video Designer Marie Jemilin. Terry Truck’s percussive score, albeit prerecorded, has a certain hypnotic appeal. In all fairness, there are moments of great beauty, both visually and balletically, amidst the stretches of tedium.

The cast of actors and acrobats are all first-rate, including Zalachas (a master of the aerial straps, when he’s not standing on a big black ball, symbolic of The Prince’s tiny asteroid) and Bednarek. Also outstanding is Laurisse Sulty as The Rose. But all the principals have their strong moments including Joän Bertrand as The King; Antony Cesar as The Vain Man; Marie Menuge as The Drunkard; Adrien Picaut as The Businessman; Marcin Janiak asThe Lamplighter; Srilata Ray as The Snake; Dylan Barone as The Fox; and William John Banks as The Switchman. There’s an impressive post-curtain call turn by Antony Cesar.

Mid-show audience applause at my performance was very tentative, as it was never quite clear whether one is actually supposed to clap or simply silently observe the action as between movements at a symphony. But the audience did break forth with well-deserved appreciation for the hard-working ensemble at the end.

Print this post
Posted by Harry Forbes at 8:24 AM