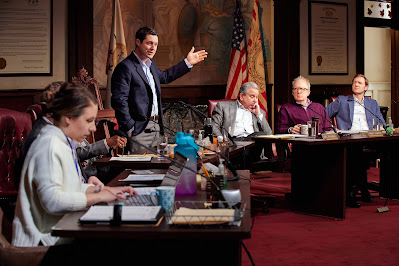 A newly elected city councilman Mr. Peel, a dentist by trade, comes back to the fictional town of Big Cherry after attending a family funeral, and becomes obsessed with the missing minutes of the council’s last meeting held while he was away. And furthermore, he can’t seem to get an answer about what has become of the colleague who seems to have run afoul of the council and is now mysteriously absent.

Such is the crux of Tracy Letts’ new dark comedy, which premiered at Steppenwolf in 2017, and which started previews here in New York at the Cort Theatre before the pandemic. It has now reopened at Studio 54 with Noah Reid, Patrick on “Schitt’s Creek,” replacing the “cancelled” Armie Hammer, as the curious and increasingly determined newbie.

The rest of the council is made up of distinguished alumni of Broadway and Steppenwolf all of whom give finely etched portraits of small-town bureaucrats obsessed with trivialities, all the while demonstrating greed, hypocrisy and self-interest. Playwright Letts plays aptly named Mayor Superba who leads the council meeting and blocks young Peel’s attempts to unearth those minutes.

The official agenda items include veteran Mr. Oldfield’s desire for a choice parking space after his 39 years on the council (a funny Austin Pendleton); passionate Mr. Hanratty’s proposal to redesign the local fountain and make it handicap accessible (Danny McCarthy); and from Mr. Blake (K. Todd Freeman), the sole African-American on the council, the installation of a “Lincoln Smackdown” attraction at the upcoming Harvest Festival which would feature a martial arts artist dressed as Lincoln. Of considerably more substance is the topic of what’s become of a stash of stolen bikes which have been impounded by the local police.

Recording secretary Ms. Johnson (Jessie Mueller) prides herself on her professionalism, and seems the nearest to an ally of Peel, but is no more revealing about the missing minutes than anyone else. Long-timer Ms. Innes (Blair Brown), the council’s grande dame, reads a lengthy prepared statement including several bombshell grievances. The comically disorganized Ms. Matz (Sally Murphy) is a hopeless klutz.

Mr. Superba is flanked by the clearly crooked Mr. Assalone (Jeff Still) and the insensitive and bullying Mr. Breeding (Cliff Chamberlain). And yes, eventually, we do get to see the missing Mr. Carp (Ian Barford who was so good in Letts’ “Linda Vista” a couple of seasons back).

For all the humor inherent in the council’s deliberations, an ominous thunderstorm periodically wreaks havoc with the town’s electrical grid and the stage is plunged into partial darkness as the lights scarily flicker and dim. There’s extremely realistic work by lighting designer Brian MacDevitt and sound designer André Pluess. And David Zinn’s marvelous set is perfect down to the smallest detail.

There’s a hilarious re-enactment by the council members of Big Cherry’s legendary 1872 battle involving marauding Indians and a kidnapped white girl that bears similarity to “The Searchers.” That little set piece within the play earns applause.

Letts is, as we know, one of our finest playwrights, and he has some important things to say here about such hot button topics as racism, white supremacy, and the current vogue for rewriting history. But the comical ineptitude and small town minutiae eventually give way to something considerably more sinister and the play suddenly takes a radical and (intentionally) off-putting tonal shift. I felt this was a dramatic misstep, but on the other hand, try as I might, I can’t come up with any bright ideas about how I’d resolve the play differently.

Flawed or not, the play rates as a major event, well worth seeing.

Print this post
Posted by Harry Forbes at 10:45 AM