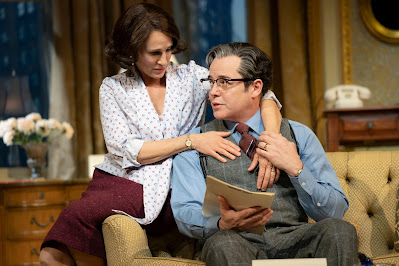 My apprehension that Neil Simon’s 1968 hit -- three one-acts set in a suite at the Plaza Hotel -- might be hopelessly dated was allayed within moments of stars Matthew Broderick and Sarah Jessica Parker taking command of the stage. Their understanding of the material and their well-honed comedic skills were brilliantly in evidence. Faint memories of the movie and past productions quickly faded as the stars, under the accomplished direction of John Benjamin Hickey, put their own fresh stamp on the Simon favorite.

This is not to say that the material isn’t very much of its time, but to this production’s credit, all the then-current references to New York are left delightfully intact, and one can approach the production as the well-crafted period piece it is.

I didn’t catch George C. Scott and Maureen Stapleton in Mike Nichols’ original production, but I did see two of their more-than-capable replacements, Peggy Cass and Don Porter, and of course, Stapleton would reprise one of her three roles in the Walter Matthau movie. Rewatching the trailer of the latter on YouTube, the overall approach strikes me as a bit heavy handed compared to Parker and Broderick’s delightfully light touch.

Each act concerns a different couple, each well differentiated by the pair: suburbanites from Mamaroneck, the wife hoping to rekindle their romance from over two decades earlier when they honeymooned there; an awestruck Tenafly housewife reconnecting with her high school boyfriend, now a famous and more-than-a-bit-sleazy Hollywood producer; and well-to-do Forest Hills parents on their daughter’s wedding day contending with the perplexing situation of the girl locking herself in the bathroom. In each, Jane Greenwood’s costumes and Tom Watson’s hair and wigs add helpfully in the transformations.

The setting is 1968/69 and there are, as indicated, many then-contemporary references: we hear such then-familiar touchstones as Metrocal, the Pepsi Generation, Dr. Joyce Brothers, Radio City’s Easter Show, not to mention all the stars that so impress Muriel in the second playlet. it’s a real time capsule including such circumstances as the recent demolition of the Savoy-Plaza Hotel to make way for the General Motors building.

The revival has the distinction of being the first Simon revival on Broadway since his passing in August of 2018, so it’s all the nicer that it's a good one. The production played a sold-out run in Boston in early 2020, and was set to open on Broadway in March of that year until the theaters were shut down. But there’s nothing stale about the production, and I’m confident Simon would be highly pleased.

One can admire anew the sharpness of his dialogue and humor, and his uncanny take on human nature. The slapstick elements are the stuff of classic farce, such as the third playlet’s father braving the building ledge to reach the locked bathroom, only to be caught in the pouring rain.

I really don’t understand the negativity of some of my colleagues. Yes, societal mores have changed, but there is much to enjoy. Above all, it provides a delicious vehicle for its two stars to demonstrate their considerable expertise.

There’s solid support from Eric Wiegand as a bellman and the recalcitrant daughter’s intended fiancé; Danny Bolero as a waiter; and Molly Ranson as the skittish bride-to-be.

Print this post
Posted by Harry Forbes at 10:51 AM