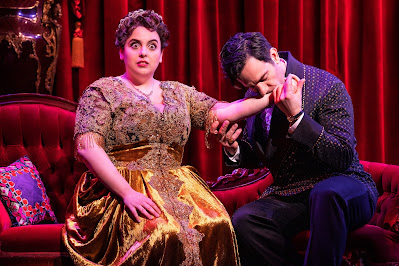 It’s good to have the Jule Styne-Bob Merrill musical based on the life of Ziegfeld star Fanny Brice back on Broadway after nearly 60 years, albeit with Isobel Lennart’s original book revised by Harvey Fierstein, so not quite the reverential replica of the original in the way that revivals of Styne’s other iconic show business musical, “Gypsy,” tend to be. But Fierstein wisely doesn’t veer too far from Isobel Lennart’s original, and then again, “Funny Girl” is not exactly in the classic “Gypsy” league.

All the original stage songs, except "Find Yourself a Man," are retained, unlike the 1968 movie which unwisely dropped such gems as  “Cornet Man,” “I Want to Be Seen With You,” “Henry Street,” “Who Taught Her Everything She Knows?," ”Rat-Tat-Tat-Tat,” “Who Are You Now?,” and “The Music That Makes Me Dance.” And it’s a pleasure to hear them again. In addition, a restored cut number from the original -- “Temporary Arrangement” (for Nick Arnstein) -- as well as the film version’s title song are thrown in for good measure, too.

The overture, almost as iconic among buffs as that of “Gypsy,” is played complete in Chris Walker’s new orchestration, though to make sure present-day audiences, not accustomed to sitting through overtures, stay awake, the proscenium lights brighten flashily with each trumpet blare. And the sound level here, and throughout the show, is likewise pumped up in the current fashion.

Director Michael Mayer’s production premiered in 2016 in London with Sheridan Smith as Fanny, and was live streamed and recorded on CD. Casting apart, that production was identical to this one, and serves as a blueprint for the way the show is performed and the songs sung. Listen to the CD with Smith, and you’ll hear how her phrasing pretty much mirrors what Feldstein does here.

There’s been much pontificating on social media about the casting of Beanie Feldstein as Fanny; no one but original star Barbra Streisand should play the role, many have opined. They seem not to realize that “Funny Girl” was played with success by countless ladies after Streisand’s original run, including Mimi Hines who took over the Broadway production after Streisand’s departure, and stayed in the show longer than her predecessor. Marilyn Michaels won acclaim in the national tour, and even Barbara Cook, still in her slim ingenue days, played opposite screen heartthrob George Hamilton. Carol Lawrence, Pia Zadora, Debbie Gibson, and others have had their day in the role, too.

However, the fact remains that Feldstein is a most peculiar choice for Fanny. Her plus-size appearance is certainly nothing like Fanny, and her vocalizing of such chestnuts as “People” and “Don’t Rain on My Parade” is merely adequate. In fact, at my performance, there were some distinctly sour notes in her otherwise nicely conversational approach to “People.” The later ballads, “Who Are You Now?” and “The Music That Makes Me Dance” went much better.

But listen to Mimi Hines on some of the “Funny Girl” items on YouTube, and you can hear that, though she’s no more like Fanny Brice than Feldstein, she vocalizes the songs powerfully. And she was genuinely funny in the role. Some years later, I also caught a memorable production at the Paper Mill Playhouse with Leslie Kritzer highly satisfying as Fanny.

Streisand won the role originally not only because of her prodigious talent, but because of similarities -- both genuine and exaggerated by her managers at the time --  to Fanny Brice. As the years pass, there seems to be less and less effort to play the role authentically. The Fanny of “Funny Girl” may as well be a totally fictitious character, no more like the real Fanny than blond Alice Faye in “Rose of Washington Square” (for which Brice sued and won over similarities to her life story).

There’s enough of Brice on film and record to allow for verisimilitude in casting and performance Not all of Jule Styne’s score would lend itself to the authentic Brice treatment but surely some of the numbers (e.g. “Sadie, Sadie” and “Rat-a-Tat-Tat”) could be done in the Brice manner. What, I wonder, would Frances Stark (Fanny’s daughter and wife of original producer Ray Stark, who had the final say-so in the original casting), have made of the current portrayal? 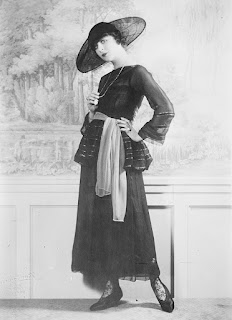 Mind you, Feldstein’s a total pro, and a wonderfully likable performer. Her reading of the songs is intelligent and, like Smith in London, she veers completely away from Streisand’s phrasing and vocal mannerisms. Nonetheless, hers is not a voice that elicits wows. And she doesn’t convey the inherent warmth and sly comedic charm of the real Brice. It’s an OK performance, but it takes a huge suspension of disbelief to accept her as the legendary actual star of stage, screen, and radio that was Brice.

West End and Broadway leading man Ramin Karimloo -- his part built up in Fierstein’s revision -- makes a dashing Nick, though his “Temporary Arrangement” production number seems like something dropped in from “Guys and Dolls.” The fictional Nick of “Funny Girl” is a complete whitewash as Arnstein, convicted for both wiretapping and bond theft, was still alive when the show was first done, and Lennart had to tread carefully in writing him.

Jane Lynch makes the most of her role as Fanny’s mother, and is a delight throughout, sardonic and warm-hearted. Eddie Ryan, Fanny’s mentor, is dynamically played by Jared Grimes who taps up a veritable storm (tap choreography by Ayodele Casel), and (with Lynch) stops the show with “Who Taught Her Everything She Knows?” 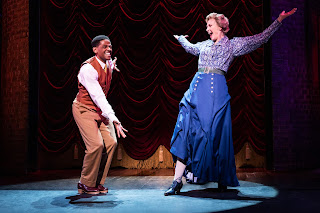 Mayer’s an accomplished director and, in all respects, one feels the production is in good hands. There are some “Follies,” the musical-like touches in the staging, as ghosts of Ziegfeld girls dreamily hover in the background as Fanny is thinking back on her life.

For all my grousing about the central miscasting, I must confess I enjoyed the show on the whole, as the wildly cheering audience clearly did as well.

Print this post
Posted by Harry Forbes at 11:24 AM