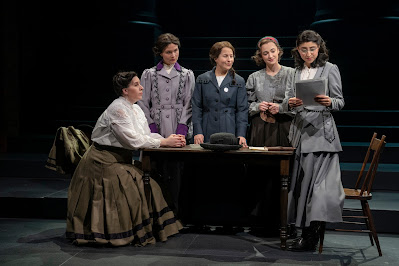 First, let it be said that Shaina Taub, who has already composed highly entertaining scores for “Twelfth Night” and “As You Like It” for the Public Theater at the Delacorte, is an amazing talent. As if creating the book, music and lyrics of her latest musical weren’t enough, she also plays the leading role of suffragist Alice Paul.

“Suffs,” for so the pioneering suffragists called themselves, tells the story of these early 20th century activists who fought over a period of seven years before the 1920 passage of the 19th Amendment, banning voting discrimination based on gender.

For all of these ladies' progressive notions, they fail to see eye to eye with their fellow black suffragists, journalist Ida B. Wells (Nikki M. James) and Mary Church Terrell (Cassondra Jones), over the issue of full integration in the march, as societal racism dictates that the latter group march at the back of the procession. This prompts a strong rebuke from Wells who sings of her refusal to “Wait My Turn,” which James sings powerfully.

Wilson (an amusingly unflattering portrayal by Grace McLean in this all-female cast) condescendingly blocks the women’s efforts at every turn. Even the efforts of Wilson advisor Dudley Malone (charming Tsilala Brock), fails to loosen the implacable Wilson. Malone eventually resigns and marries Doris Stevens. The two of them share one of the score's lighter duets, “If We Were Married.”

It’s easy to think of Taub as the female Lin-Manuel Miranda, and indeed there are similarities to “Hamilton” in the telling of the story and the musical style. Admittedly, “Hamilton” covered a wider canvas of characters and time span, and had greater variety to its musical texture. So “Suffs” feels a bit inflated at its nearly three-hour length. But with its tuneful score and first-rate cast, it’s certainly a worthy musical in every way, not least in popularizing the story of these pioneering women.

Some may remember the 1974 “Masterpiece Theatre” presentation of “Shoulder to Shoulder,” which told the story of the British suffragists Emmeline Pankhurst and her daughters, and will notice a similar dramatic arc as Alice Paul and her colleagues meet fierce resistance, are imprisoned, force fed when they go on a hunger strike, and eventually, prevail against seemingly impossible odds to get the amendment passed.

At several points, the all cast engages in vaudeville turns which underscore the salient themes. “Watch out for the Suffragettes,” is one such. Wilson’s sardonic “Ladies” is another. The flavorsome choreography by Raja Feather Kelly

Music direction and music supervision of the 12-piece orchestra are in the accomplished hands of Andrea Grody who not only conducts, but plays keyboard. (Orchestrations are by Mike Brun.)

In  spite of Leigh Silverman’s seamless and accomplished direction, and the first-rate cast, some trimming would, as indicated earlier, be advantageous, but “Suffs” is sure to have a future beyond its limited run at the Public.

This is clearly Alice Paul’s theatrical season, as she figures -- in a quite humorous if tangential way -- in Selina Fillinger’s current Broadway comedy “POTUS.”