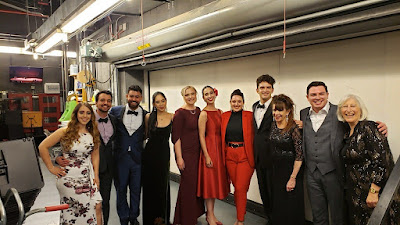 Winners of the International Vocal Competition took the stage at Carnegie Hall’s Zankel Hall on Sunday afternoon, after a hiatus of four years.

The competition, under the auspices of the Gerda Lissner Foundation in association with the Liederkranz Foundation, comprises three divisions: the Lieder Song Vocal Competition, an Operetta and Zarzuela Division and a General Division. The Gerda Lissner Foundation was created in 1991 by Mrs. Lissner, a decades-long Metropolitan Opera subscriber, to provide financial support for young opera singers. In all, $98,500 was awarded in prize money.

The concert’s first half, accompanied by pianist Mary Pinto, began with the Lieder winners which included soprano Yvette Keong’s impassioned rendition of Rachmaninoff’s “To Her,” and an exquisite rendering of Stephen Foster’s chestnut “Beautiful Dreamer.” She was followed by baritone Gregory Feldmann whose warmly expressive baritone shone on William Grant Still’s “Citadel” and Franz Schubert’s “Auf der Bruck.”

The first half finished up with what amounted to a mini zarzuela recital, as all three of the top winners in the Operetta and Zarzuela competition chose selections from the richly melodic but (in this country) relatively unknown Spanish operetta genre. Soprano Evelyn Saavedra, characteristically dressed in red with a matching flower in her hair, offered a stylish account of the familiar “De España vengo” from Pablo Luna’s classic “El Niño Judio.”

The program’s second half, accompanied by pianist Arlene Shrut, spotlighted the General Division winners. The set began with, in fact, another operetta selection, “Ô petite étoile” from Emmanuel Chabrier’s “L’étoile.” Shannon Keegan’s warm mezzo sailed over some intrusive traffic noise and she was unfazed by premature applause.

Baritone Eleomar Cuello, who had just flown in from Spain earlier in the day, was none the worse for wear as he delivered a beautifully vocalized “Mein Sehnen, mein Wähnen” from Korngold’s “Die Tote Stadt.”

Throughout the concert, both Pinto and Shrut offered sensitive and incisive accompaniment.

The occasion was sadly missing two of its mainstays, Stephen De Maio and Brian Kellow, both of whom passed away since the last concert. Both men were eulogized most movingly by the afternoon’s host, Midge Woolsey. “Think of the difference they made in all our lives” she said of De Maio and Kellow. Throughout the concert, Woolsey provided unflagging charm and enthusiasm, introducing each singer and putting their selections in interesting context.

As a finale, all nine of the singers joined forces on the choral “Sunday” number from Sondheim's “Sunday in the Park with George.” A lovely way to wrap up a Sunday afternoon!

As you could hear remarked by the exiting crowd, if what we experienced was any indication, the forecast for opera’s future looks bright indeed.

Print this post
Posted by Harry Forbes at 10:11 AM