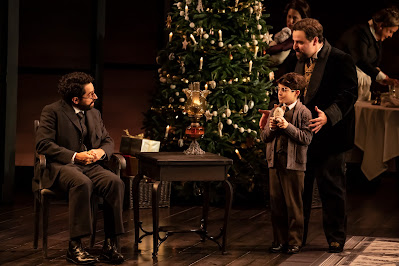 Tom Stoppard, arguably Britain’s greatest living dramatist, has an undeniably stellar track record, and his latest -- lauded in London and now on Broadway with an almost all American cast -- is no exception. And unlike some of his other works, which can be intellectually challenging, the main hurdle for audiences here is keeping track of the myriad characters and their relationships to each other.

For this is a multi-generational story of two blended families in Vienna’s Jewish district which gives the play its name. By the time we get to grandchildren and great-grandchildren, one’s mind is a muddle. And this despite Stoppard applying all this considerable dramaturgical skills to allow an audience to identify and differentiate the characters.

But no matter. The principal relationships in each scene -- which take place in 1899/1900, 1934, 1948, and 1955 respectively -- are clear enough. And though there is, at times, rather too much exposition, starting with a lengthy exchange between mathematician Ludwig and brother-in-law business tycoon Hermann about assimilation, for the most part, this is very much an identifiable human story with as much action as cerebral talk.

The play is two hours and 10 minutes without a break, a longish stretch that would not, I would venture, be damaged by a standard intermission after the second scene. Bladder considerations aside, the break might even allow audience members to consult their programs, and parse the characters’ relationships amongst themselves.

The first scene (1899) is an elaborate Christmas celebration; yes, Christmas, as a couple of the family members have Christian spouses, illustrating how Christmas and Hanukkah were at that time casually intermingled as when young Jacob (Hermann’s son) impishly places a star of David on the tree. The second revolves around a largely comical bris of Ludwig’s niece’s infant son. The third takes place the violent night of anti-semitic demonstrations and violence known as Kristallnacht and the Nazis at last breaking into the family’s cozy domain. And the last act, with three of the descendents meeting at the now stripped down location of the earlier acts, reveals the sad fates of nearly everyone in the family.

We’ve seen variations of this story many times before, to be sure, especially in films, so the ending is perforce predictable, but told through the prism of Stoppard’s superlative pen, it’s a worthy addition to those Holocaust-themed stories of the past. And it’s also the most personal statement about Stoppard’s own Jewish background of which, like young Leo in the final scene, he was mostly ignorant as he was raised in England.

Playwright/director Patrick Marber (“Closer”), a Stoppard veteran, directs with a predictably skillful hand, not only eliciting fine performances from his large ensemble but blocking the actors for maximum comprehension, at least as much as Stoppard’s dense panoply of characters allows. The play opened in London in 2020, winning the Olivier Best Play award, and there’s already been one of those National Theatre Live video relays, one which was blacked out in the states presumably because of the incoming Broadway production. But it would be fascinating to compare the two casts. (The holdovers from the London are Faye Castelow as Herman’s adulterous wife Gretl, Jenna Augen as Ludwig’s sister Wilma and, later, her daughter Rosa, Aaron Neil as Ludwig’s brother-in-law Ernst, and Arty Froushan as arrogant dragoon Fritz and later Ludwig’s clueless grandson Leo, who’s more or less the Stoppard prototype.) And the narrative would no doubt be aided by close-ups.

This is such a seamless ensemble of 38 players, it’s difficult or even wrong to single out individual performances, but Brandon Uranowitz is particularly dynamic as Ludwig, and David Krumholtz outstanding as Hermann, his character sadly confident that he has cracked Viennese society and that anti-Semitism is on the wane. The former shows up in the last scene as his grandnephew Nathan. The stories of Ludwig and Hermann dominate the first scene and as such, register as predominant characters.

No matter how often we’ve seen stories like this dramatized, from “The Diary of Anne Frank” onwards, they never fail to provide a gut punch, and in the hands of a master like Stoppard, the effect is ineffably moving and devastating.

Print this post
Posted by Harry Forbes at 12:03 PM