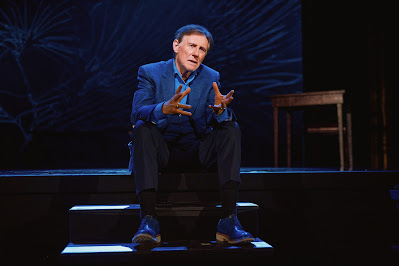 Gabriel Byrne’s acclaimed memoir has been turned into a viable and engrossing theater piece by the fine Irish actor. And I would say the evening is recommended even for folks, like myself, who don’t particularly relish one-person shows.

Economically but cannily staged by actor/director Lonny Price -- who previously directed Byrne in a New York Philharmonic concert performance of “Camelot” broadcast on “Live from Lincoln Center” in 2008 -- Byrne’s play reveals a classic Irish gift for poetry and storytelling.

Sinéad McKenna’s scenic and lighting design is a simple one, apart from the occasional theatrical flourish like a lighted proscenium, and utilizes the most basic of props: a bench, stool, table and chairs. The focus is squarely on Byrne as he takes us back to his childhood in Ireland where he conjures up the ghosts of his past, vividly reenacting his home life with his parents and siblings, his beloved grandmother who first took him to his first movies (a life-altering experience), his aversion to school, first Communion, seminary training (at the time, he felt a genuine vocation for the priesthood), through his early days as an actor after odd jobs as a plumber and dishwasher, and subsequent drinking problems. Sinéad Diskin provided the mood-setting sound design and original music.

Byrne's tale may put you in mind of other Irish memoirs, like Frank McCourt’s “Angela’s Ashes,” though Byrne’s upbringing was not imbued with the dire poverty of the McCourts. The show runs two hours and 20 minutes with one intermission, and both acts have their share of heartache. But there’s no shortage of humor along the way.

Though the focus is on those early years, the theatrical side of his career is not ignored. The most lighthearted sequences of the evening involve his early days as an actor. He was at loose ends when he came across a want ad for actors -- “no experience necessary” was the initial incentive -- and, in short order, found himself warmly embraced by a local company which taught him the thespian ropes.

After early success on television, he lands a golden opportunity to appear with his boyhood idol Richard Burton. The project is not mentioned by name, but it appears to have been the starry TV mini-series “Wagner,” based on the composer’s life. (It aired on PBS in 1983.) Burton was a welcoming colleague but his alcoholism would serve as a prescient warning to young Byrne who would have his own struggles with the bottle.

Byrne doesn’t trace his career any further than the Burton encounter, nor his romantic involvements or marriages; perhaps a sequel will cover those later years.

His narrative also includes poignant recollections of the death of his parents, both movingly told.

Throughout, the "In Treatment" star proves himself a natural mimic, and his impersonations of his parents, teachers, apprentice acting colleagues, a lecherous priest at the seminary and, of course, Burton, are highly entertaining.

Though one of the more modest offerings currently in a major Broadway theater, the queue for entry stretched far down 45th Street, affirming Byrne's charismatic appeal.

Print this post
Posted by Harry Forbes at 9:12 AM