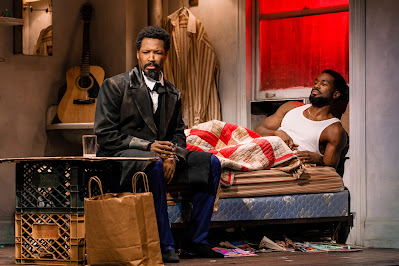 The narrative concerns whimsically named brothers Lincoln and Booth uneasily living together in a single room where they plot an uncertain future and rehash their painful past. This production features two absolutely superb performances from Corey Hawkins and Yahya Abdul-Mateen II in roles originated by Jeffrey Wright and Don Cheadle at the Public Theater. (Mos Def assumed Cheadle’s role when the play opened on Broadway the following year.)

I didn’t see that production, but I can’t imagine that the roles’ originators could have been better than the present cast who balance comedy and underlying sadness with masterful aplomb.

Elder brother Lincoln (Hawkins) works in an arcade as, with supreme irony, a white-face Abraham Lincoln impersonator where patrons can pretend to reenact the latter's assassination; his brother Booth (Abdul-Mateen) is a shoplifting hustler who’s never had a real job in his life, but dreams of joining forces with his big brother Lincoln who had previously excelled as a three-card monte con artist, bilking passers-by with enviable skill. (in fact, Booth announces with total solemnity that he wants to change his name to 3-Card.)

Lincoln, however, wants nothing more to do with the cards, though he fears he’s about to be made redundant by a wax likeness of Abe, and rehearses some extra business for his impersonation that just might persuade his employer to keep him. Booth, for his part, returns home wearing layers of spiffy clothes guaranteed to impress the ladies, especially a gal named Grace. His preparations for a date with Grace is a comic high point.

Along the way, there are sobering revelations about their childhood: abandoned by their parents while the boys were still teenagers and having to fend for themselves. The frequent tonal shifts from the humorous to the poignant are masterfully handled by the two actors under the assured direction of the great Kenny Leon.

The enactments of the much discussed card scam, played out on a sheet of cardboard over a couple of milk crates in full view of the audience, are authentically executed, a marvel in themselves.

There’s a good deal of interstitial music, some at rock concert decibels. But within the play, Hawkins gets to perform a compelling blues number accompanying himself on guitar. A lovely moment, even though there’s a sinister subtext to the scene.

Arnulfo Maldonado’s claustrophobic and very plausible boarding house set is framed, paradoxically, by an elegant gold curtain  Dede Ayite’s costumes, from Lincoln’s presidential costume to the cool duds shoplifted by Booth are a show in themselves.

So who’s the top dog and who’s the underdog? Lincoln or Booth? Parks keeps us guessing right up to the end, in a most thoroughly entertaining fashion.

Print this post
Posted by Harry Forbes at 10:27 AM