A Man of No Importance (CSC Repertory) 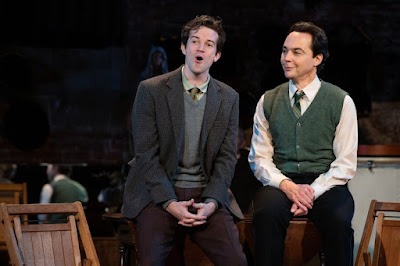 The first mainstream New York revival of the 2002 musical created by Lynn Ahrens (lyrics), Stephen Flaherty (music), and Terrence McNally (book) is a lovely one, perfectly suited to the cozy CSC stage. The original production at the (also intimate) Mitzi Newhouse Theatre starred the late Roger Rees in the role of an Irish bus conductor played, in turn, by Albert Finney in the 1994 non-musical film.

This time around it’s Jim Parsons as Alfie Byrne, the closeted gay man in 1964 Dublin, harboring a secret crush on Robbie, the handsome bus driver on his daily route (played by A.J. Shively, so good in last season’s “Paradise Square”). Alfie is a theater buff who reveres Oscar Wilde as Ireland’s greatest playwright. And he runs the local theater group -- the St. Imelda’s Players in the local church hall -- with all his bus regulars taking enthusiastic part.

They’ve played all the Wilde comedies, but now Alfie has his sights set on the atypical Wilde drama, “Salome.” When newcomer Adele (pure-voiced Shereen Ahmed), a shy young woman, takes the bus one day, Alfie is sure he’s found his ideal Salome.

Alfie lives with his unmarried sister Lily (Mare Winningham) who, completely in the dark about her brother’s sexuality, continues to hope that he will find the right girl. She, in turn, is being courted by the local butcher Mr. Carney (Thom Sesma), The Players’ leading man.

The thrust stage is, as always, an involving setting, and director John Doyle has his cast make full use of the aisles and stairs. As you might expect with Doyle at the helm, yes, several members of the cast play their own instruments which, on this occasion, seems fitting in establishing a sense of community, and, as in the musical “Once,” seems apt for the Gallic setting.

Lynn Ahrens and Stephen Flaherty’s modest but pleasing Irish-flavored score lends itself well to this treatment. There are no outright showstoppers though Robbie’s “Streets of Dublin” (memorably performed by Steven Pasquale in the original cast) gets a fine, rousing treatment by Shively. But hearing the score again, played and sung so well, confirmed its overall quality: the company’s jaunty “Going Up”; Adele’s plaintive “Princess”; Baldy’s wistful “The Cuddles Mary Gave” sung at his wife's grave;

Parsons, younger than his predecessors in the role, makes the role his own, and reveals a fine singing voice and credible Irish accent. Winningham is also outstanding both dramatically and vocally, after demonstrating her musical chops in the recent “Girl from the North Country.”

Print this post
Posted by Harry Forbes at 11:16 AM