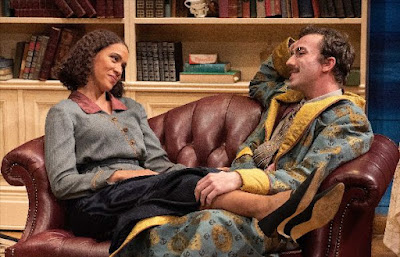 Noel Coward’s first substantive play -- written when he was 18 but not produced for several years later (and then at Hampstead’s Everyman Theatre for a limited fringe run, rather than London’s West End) after he was a firmly established playwright -- is finally enjoying its American premiere courtesy of the adventurous Mint. (There had been a 2006 revival at London’s Finborough Theatre.)

Though not in the same league as most of Coward’s later work, and not a comedy, in spite of some choice epigrams here and there, there’s much to admire in the young Coward’s precocious skill and talent. And the production will, of course, be of great interest to Coward and serious theater buffs.

Coward himself delivered a clear-eyed assessment in the forward to one of his Play Parade compilations: "It is not without merit. There is some excruciatingly sophisticated dialogue in the first act of which, at the time, I was inordinately proud. From the point of view of construction, it is not very good, except for the two principal quarrel scenes. The last act is an inconclusive shambles…”  Yet, he fervently wished he could see a production of it, especially as he had been out of the country even for the Hampstead premiere.

Those remarks are a bit harsh but, on the whole, accurate based on the creditable and enjoyable Mint production, smartly directed by Alexander Lass.

The story concerns promising young novelist Sheila (Sarin Monae West), who’s already penned one bestseller, newly married to Keld (James Evans), a budding playwright, harboring the notion that they will nurture each other’s efforts in blissful harmony. Sheila’s observant friend and roommate Olive (Elizabeth Gray) is highly skeptical, and indeed her misgivings prove prescient when, six months later, the self-absorbed Keld becomes unpleasantly irritable at every domestic interruption from the stolid maid Burrage (a scene-stealing Cynthia Mace), and now not at all tolerant of Sheila’s writing efforts. He expects her to handle all the domestic details like a good wifey.

The situation would seem to suggest a boldly feminist point of view, and for a while, Coward continues on that track. But all that comes to naught in that weak final act and denouement.

Adding some levity and a different perspective to Sheila and Keld’s domestic strife are the secondary characters of Naomi (Heloise Lowenthal) and Edmund (Ramzi Khalaf), she a novelist and he a poet, who live in unmarried “sin” and harmony. Edmund was played in the original production by Raymond Massey.

There’s also a troublesome ex-Gaiety girl Ruby (amusing Claire Saunders) who has a part in Keld’s play and continues to badger him for more roles. She was originally played by Adrianne Allen who, a few years later, would marry Massey, and out of that union would come actors Daniel and Anna Massey. Their messy divorce 10 years later made headlines. But I digress. 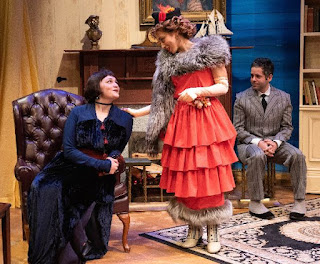 The Mint’s cast, admirably and unobtrusively diverse, is quite capable, British accents are good, and everyone seems to have the measure of their role. West creates a very sympathetic portrayal of Sheila. Gray is especially solid as the wiser older friend. Though overall Evans is well cast in his role, his peevish outbursts in the second and third acts go beyond the realm of irritability and register as borderline psychotic, but it’s difficult to know whether the script would allow for a more nuanced interpretation.

Khalaf and Lowenthal perform an interpolated Coward number, “Forbidden Fruit,” the playwright’s first important song, and just to close the historical loop, sung by Daniel Massey (as Coward) in the Gertrude Lawrence biopic “Star!” But the interlude is superfluous.

Props to the Mint for doing this Coward rarity, and here’s hoping they exhume more of them.

Print this post
Posted by Harry Forbes at 8:42 AM