August Wilson’s Pulitzer Prize-winner, which premiered at the Yale Repertory Theatre in 1987 and then came to Broadway in 1990) is receiving its first Broadway revival, and it’s a first-rate one. Samuel L. Jackson, John David Washington and Danielle Brooks head an accomplished cast under the savvy direction of first-time Broadway director LaTanya Richardson Jackson (wife of Samuel).

Hotheaded Boy Willie (Washington) and his sidekick Lymon (Ray Fisher) noisily burst into the home of Willie’s widowed sister Berniece (Brooks) who lives with their railway worker uncle Doaker Charles (Jackson) early one morning in 1936 Pittsburgh. They’ve driven up from Mississippi to sell a truckload of watermelons, but Willie’s principal motive is to sell the antique piano with which Berniece adamantly refuses to part as it's a family heirloom with profound significance. With his half of the sale earnings, Willie hopes to buy the farm where their ancestors toiled as slaves, and make something of himself. Doaker eventually relates the piano’s history in a lengthy speech beautifully delivered. (In fact, all the characters have their major moments.)

We learn the piano is adorned with carvings of the Charles family’s ancestors from slavery times, and Willie and that Berniece’s father died in stealing it from Sutter, the descendent of the slave owner who owned it. Subsequently, their mother treasured the piano as it was her most tangible keepsake of their father. Willie stubbornly believes a solid future is more important than preserving the past.

Apart from Berniece’s young daughter Maretha (Nadia Daniel at my performance) playing it, the instrument stands idle. Berniece refuses to touch it. And the house is, in fact, haunted by the spirit of Sutter whose ghost is witnessed by Berniece and Maretha. (Yes, this is a bona fide ghost story.) Even Doaker confesses he’s sometimes heard the piano playing when no one is around.

Washington gives an explosive performance, comparing favorably to Broadway originator Charles Dutton. (Interestingly, Samuel L. Jackson played that role in the Yale production, and was Charles Dutton’s understudy back in 1990).

Doaker is a contained character, but Jackson exudes quiet power whenever he speaks or even when he simply sits in the adjoining kitchen observing the action around him.

Fisher makes a marvelously guileless Lymon, and the scene in which Avery cons Lymon into buying an ill-fitting, garish silk suit (1930s costumes by Toni-Leslie James) is as amusing as his subsequent flirtation with Berniece is touching. The versatile Brooks is, as always, terrific. 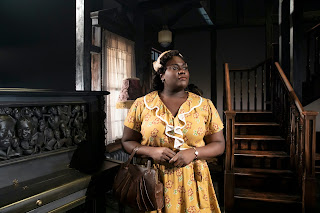 There’s good work too from April Matthis as good time girl Grace both Willie and Lymon hope to seduce.

Wilson’s prose is often dense, and there’s a good deal of expository dialogue. And at first the heavy regional accents prove challenging but eventually the ear adjusts.

The 1995 Hallmark Hall of Fame TV production with Dutton and several other members of the original cast makes for interesting viewing and is available as of this writing on YouTube. Wilson opened up the play a bit for the screen and the performances are outstanding. But there were some cuts and edits for television. I'm glad to know the present production will be preserved, and is currently in the pre-production stage.

Print this post
Posted by Harry Forbes at 9:13 AM