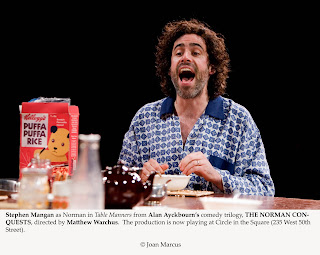 Readers of a certain age may remember the British TV version of playwright Alan Ayckbourn's exceedingly clever comic trilogy -- "Table Manners," "Living Together," and "Round and Round the Garden" -- as one of public television's golden moments. Others may remember a so-so Broadway version headed by Richard Benjamin.

This new revival -- an import from London's Old Vic -- is closer to the TV version in demonstrating just how the piece should be played, with six splendid performances.

The premise is basically immoral, though as in all classic farces hopes for hanky-panky come to naught. Norman, a shaggy librarian, has invited his wife's sister, Annie, away for an illicit weekend. Annie, unattached (except for the attentions of the dim veterinarian next door), unkempt, and devoted to a sick mother, has accepted. But when brother Reg and his self-righteous wife, Sara, arrive to take care of mom while Annie is "on holiday," Sara thwarts the plan. Ergo, all of them stay at Annie's for an event-filled weekend.

The plays take place in the dining room, living room and garden, respectively. They can be viewed in any order, and each is self-contained.

With Ayckbourn, the comedy is secondary to his always perceptive take on the human condition. And this production features a mix of comedy and pathos such as you would find in Anton Chekhov. The basic loneliness of these characters, their frustrations and inability to connect are movingly handled. When Norman cheekily suggests to Sara that they themselves might one day have a weekend together, we laugh at the outrageousness of the suggestion, but feel deeply for Sara, whose mournful body language shows us her inner longing for affection.

Director Matthew Warchus brings out the poignant subtext as deftly as the laughs. One needn't see all three. But after seeing one, you may just want to prolong the pleasure. (Circle in the Square, 235 W. 50th St.; (212) 239-6200 or Telecharge.com) Print this post
Posted by Harry Forbes at 12:00 PM