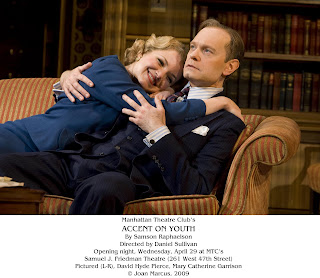 This play by Samson Raphaelson -- with its dreadfully dated premise: Can a "young" woman and an "older" man find lasting love? -- was once hugely popular.

When we tell you that the woman in question, a mousy lovelorn secretary, is 29, and the man -- a playwright who has just drafted a play on the very subject -- who is (gasp!) 53, you'll have some idea how times have changed since its Broadway premiere in 1934.

Still, the play does have its mild charms. And the property was durable enough that it spawned no less than three movie versions with Herbert Marshall, Bing Crosby and Clark Gable, respectively. David Hyde Pierce is the star of this Manhattan Theatre Club revival. He plays the playwright with charm and seasoned comic timing.

Mary Catherine Garrison does well as the secretary who, after declaring her love for her boss, gets the lead in the play (and a makeover), only to have her young leading man, played by David Furr, fall head over heels for her. Charles Kimbrough is terrific as the playwright's butler who follows his employer's example.

There's some sporadically amusing banter of the sort that was once considered sophisticated, along with a rather cavalier attitude toward divorce and premarital liaisons. Like an antique movie on Turner Classic Movies, this is best viewed as a historical curiosity. (Manhattan Theatre Club at the Samuel J. Friedman Theatre, 261 W. 47th St.; (212) 239-6200 or Telecharge.com) Print this post
Posted by Harry Forbes at 12:05 PM