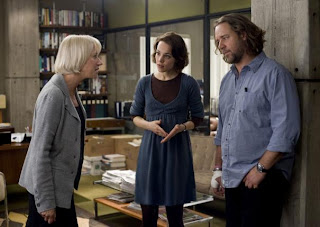 Fans of the acclaimed 2003 six-hour BBC miniseries of the same name, created by Paul Abbott, may be disappointed by the movie's streamlined Americanized distillation, but putting possibly odious comparisons aside, "State of Play" (Universal/Working Title) has emerged as a fast-moving and engrossing political thriller in its big-screen incarnation.

Now set in the District of Columbia, the protagonist is scruffy veteran reporter Cal McAffrey, who works for the fictitious Washington Globe. He is played by straggly-haired Russell Crowe in customary charismatic form.

When the research assistant (and mistress) of an up-and-coming politician, Congressman Stephen Collins (Ben Affleck), meets with a grisly end on the Metro subway tracks, McAffrey -- an old friend of the politician -- joins forces with Della Frye (Rachel McAdams), a rookie Capitol Hill blogger at the same paper to cover the story. The conflict between old-style journalism and the newer breed that Della represents gives interesting shading to the characters' dynamic. Refreshingly, their characters maintain a strictly professional relationship, though one of growing mutual respect.

The young woman's death is first assumed to be a suicide, but it shortly develops that it was murder, one that may be connected to the two other seemingly disparate shootings that open the film, that of a delivery man and a junkie.

As it happens, Collins, chairman of a committee overseeing Department of Defense spending, is trying to expose a crooked alliance with a powerful military contractor, the fictional PointCorp, which is getting the contracts for much of the military's outsourcing. Could there be a connection to the murders?

McAffrey and Collins were once college roommates, though estranged after McAffrey's long-ago affair with Collins' wife, Anne (Robin Wright Penn). That marriage has long been unsteady, though Anne still admires her husband's ideals. In any case, Collins shows up at McAffrey's apartment looking for help.

McAffrey is shown to be a man of integrity, putting his loyalty to his old friend ahead of the demands of his hard-nosed editor, Cameron Lynne (Helen Mirren), who desperately needs to boost sales of her failing paper. Anne still carries a torch for McAffrey, but he demurs from any resurrection of their romance.

Kevin Macdonald directs at a taut pace, and though events are not always plausible, and some of the revelations a bit transparent, there are compensations, namely an intriguing basic setup, a solid cast (including Jason Bateman as a sleazy PR man and Jeff Daniels as Collins' hard-nosed congressional opponent), and a script -- by Matthew Michael Carnahan, Tony Gilroy and Billy Ray -- that eschews overt sex and violence.

Print this post
Posted by Harry Forbes at 12:03 PM