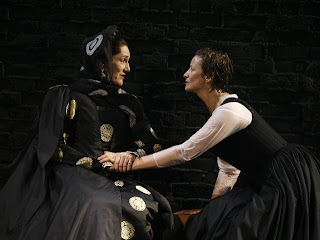 You honestly can't imagine how vital a 200-year-old play can be until you've seen the London import of Friedrich Schiller's "Mary Stuart," a gripping -- if not always accurate -- telling of the Catholic Scottish Queen Mary's final days as the prisoner of her cousin, Queen Elizabeth I.

Though the original revival was four whole years ago in London, its sensational leads, Janet McTeer in the titular role and Harriet Walter as the Virgin Queen, are as spectacular as ever, and the mostly American supporting cast, including Maria Tucci, Brian Murray, Chandler Williams, John Benjamin Hickey and Nicholas Woodeson, very fine indeed.

Catholicism plays a big part in this story, and, in essence, Schiller's sympathy is with Mary. His Mary is innocent of conspiring against Elizabeth.

Schiller, like other dramatists of stage and screen after him, gives us the confrontation between these two strong women that history failed to provide. That meeting here comes after spectacular stage rain effect and it's a doozy. First, McTeer shows Mary's humble supplication, but when the cold queen spurns her pleas, she unleashes a blistering diatribe.

The Catholic elements are treated reverentially, as Mary makes her final confession, and earlier, young courtier Mortimer rapturously extols the joys of the Catholic faith to Mary.