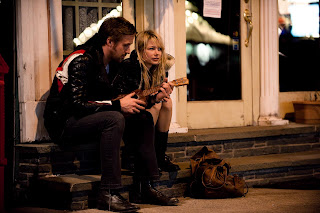 Much as one can admire the work of Ryan Gosling and Michelle Williams as a couple at the beginning and (possibly) end of their six-year relationship, this intentionally murky scenes from a marriage which toggles back and forth in time is more frustrating than enthralling.

As the story unfolds so meticulously by degrees, almost any plot description might spoil the pleasure of the revelations such as they are. But suffice to say, at the film’s start, couple Dean and Cindy are married with a young daughter. Frankie (Faith Wladyka). Cindy’s a medical technician; he’s a house painter.

Though it’s clear that director Derek Cianfrance and his fellow screenplay writers Joey Curtis and Cami Delavigne has striven mightily to keep the two protagonists in balance, I’d say Gosling still emerges as the more empathetic character by far, both by dint of the actor’s personal charm, and his character’s apparent devotion to his wife and child.

As Cindy expresses ever increasing frustration with him, his biggest sin – apart from perhaps drinking too much -- would appear to be lack of professional ambition, whereas her increasing sense of discontent seems ill-founded.

The film achieved some notoriety when the MPAA slapped it with an NC-17, though it’s since been edited to R specifications. There still remain a couple of graphic sex scenes (only one involving Gosling), but they’re reasonably organic to the story.

The ending is somewhat open-ended, or at least that’s how I saw it, but on the whole, I thought the narrative has too many holes and contrivance to seem totally convincing.

The early scenes were shot in super 16MM - and the present in extreme close-up using two red cameras -- but the filmic texture of those processes notwithstanding, it is Gosling’s hairstyle that provides the clearest clue as to which time period is presently on view.

(Rated Rated R on appeal for strong graphic sexual content, language, and a beating; originally rated NC-17 for a scene of explicit sexual content.) Print this post
Posted by Harry Forbes at 11:00 AM