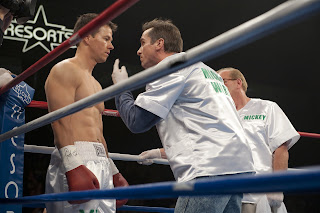 “The Fighter” is the gritty true life story of boxer Micky Ward (Mark Wahlberg) who, after losing a series of fights, has the chance at the World Championship but is handicapped by his overbearing manager mother (Melissa Leo) and his drug-addicted half-brother Dicky Eklund (Christian Bale) who serves as his trainer. The blue-collar setting is Lowell, Mass.

Dicky, a former boxer himself, once shared the ring with Sugar Ray Robinson (though he lost), and is now a ne’er-do-well who runs off to a crack house at every opportunity, and eventually, after a violent encounter with the police, ends up in prison.

Micky’s barmaid girlfriend Charlene (Amy Adams) urges him to break with his family which also includes nine (count ‘em!) sisters, seemingly all as ferocious as their mother, but ultimately, Micky comes to learn that he needs his wayward brother’s expertise and the support of his family, for all their flaws.

Scott Silver, Paul Tamasy and Eric Johnson’s screenplay is as much a sordid domestic drama as it is a boxing picture, so be warned: the family squabbles are pretty relentless. Mother Alice is one tough cookie, though her bravado is scarily entertaining.

The downbeat milieu notwithstanding, the film is not without humor, and ultimately it becomes a story of redemption, sending you forth with a feeling of uplift.

Performances are first-rate. Wahlberg proves again what a solid actor he’s become, and his fight scenes are totally convincing. He's the relatively calm center of the scenery-chewing histrionics around him.

A gaunt Bale has a much flashier role, and he truly inhabits the unruly Dicky. Leo impresses anew as the harridan mother. And Adams’ atypically tough portrayal, far removed from her more ladylike roles in “Enchanted” and “Julie & Julia,” is also outstanding.

(This film has been rated R by the MPAA for language throughout, drug content, some violence and sexuality.) Print this post
Posted by Harry Forbes at 3:58 PM