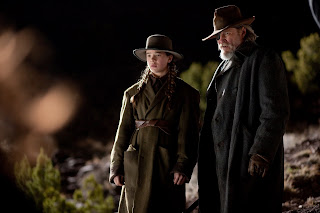 The Coen brothers have done right by Charles Portis’ 1968 novel, already famously filmed in 1969, when it garnered an Oscar for John Wayne. The present version is, well, grittier, and truer in spirit to Portis’ vision.

Jeff Bridges has a field day with John Wayne’s role of the boozing Rooster Cogburn, though I sometimes found his dialogue a bit unintelligible for all its grizzled ripeness.

Matt Damon, whose natural good looks can make you forget his skill as a fine character actor, is also outstanding as the garrulous Texas Ranger also on Chaney’s trail who joins up with the duo as they venture into Indian Territory to find the miscreant. He gives the role far more substance and humor than Glen Campbell’s rather generic interpretation in the earlier film.

And Steinfeld is a younger heroine than Kim Darby, making her courage, determination and resourcefulness all the more striking. And a coda to the main narrative with Mattie now an adult (Elizabeth Marvel) gives added substance.

Brolin’s role is short, but vividly characterized. Barry Pepper is well cast as outlaw Lucky Ned, the leader of Chaney’s gang, who runs into the Mattie’s posse midway through the film.

The look and feel of the film is far more atmospheric than the earlier version which today has the somewhat flat look of a made-for-TV movie.

(The film has been rated PG-13 for some intense sequences of western violence including disturbing image.) Print this post
Posted by Harry Forbes at 8:01 AM