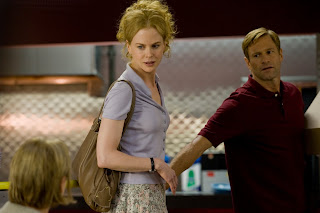 If you were to avoid the adaptation of David Lindsay-Abaire’s Pulitzer Prize-winning Broadway play fearing its downbeat theme – a couple, Becca and Howie, coping with the sudden death of their four-year-old son several months earlier – you’d be missing one of the year’s best.

For starters, Nicole Kidman gives an absolutely extraordinary performance – as did Cynthia Nixon in the play, for that matter – and for Kidman, this is one of her finest portrayals in a career full of them. And Aaron Eckhart is also spectacular as her spouse, futilely trying to bring their lives back to normal. Without outward signs of conventional grief, it’s clear these two have lost their purpose in life, and simply don’t know what to do with themselves.

The film is one of the best depictions of the grief process shown on screen, and even as it ends on a hopeful note, there’s nothing contrived or false about how that is achieved.

Howie tries to find solace in a sympathetic woman (Sandra Oh) from his bereavement group, while Becca (Kidman) – most interestingly -- reaches out to the quiet and sensitive teenager (Miles Teller) responsible for her child’s death.

Lindsay-Abaire’s screenplay – nicely opened up from the stage -- is so deftly constructed so that even this simple plot description contains some spoilers best experienced moment by moment as he shows us the couple’s predicament by subtle degrees.

John Cameron Mitchell directs with the utmost sensitivity to the subject matter.

There’s fine work, too, from Dianne Wiest as Becca’s mother, who has experienced loss herself; and Tammy Blanchard as Becca’s sister. But it’s Kidman, whose low-keyed, superbly natural performance blows you away.

The film has been rated PG-13 by the MPAA for mature thematic material, some drug use and language.) Print this post
Posted by Harry Forbes at 12:14 PM