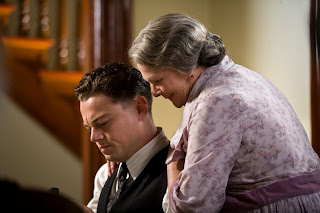 As with the actresses who used to play the aging and heavy Queen Victoria, make-up goes a long way to helping Leonardo DiCaprio into a convincing J. Edgar Hoover from young man to old age and death. But there’s no denying that what makes his performance so dynamic comes from the inside out.

The film focuses on several key episodes of the FBI director’s life – his pursuit of Prohibition-era gangsters like John Dillinger, the kidnapping of aviator Charles Lindbergh’s baby, his wiretapping of Martin Luther King, etc. – and in his private life, his dependence on a domineering mother (Judi Dench), and a close friendship with his number two man at the Bureau, Clyde Tolson (Armie Hammer).

As we don’t know for sure the true nature of the latter’s closeness to Hoover, Dustin Lance Black’s script takes the safe middle ground, and the friendship is never shown to be physically consummated nor, for that matter, on Hoover’s part, is love per se ever articulated. So, too, Hoover’s rumored propensity for cross dressing only comes up in a poignant scene prompted by an emotional crisis. Platonic or not, the relationship between the two men emerges as a sort of love story, with a dotted line to Helen Gandy (Naomi Watts), Hoover’s devoted secretary for many years.

Like “Hereafter,” this is rather surprising subject matter to bear the Clint Eastwood stamp, but it’s sensitively done, with a delicate musical score by the director to match.

Some may find the narrative back and forthing through eras a tad confusing, or carp about the film’s limited focus. But as a showcase for one of our best screen actors, and as another feather in the cap of its distinguished director, “J. Edgar” is a compelling piece of work.

(This film has been rated R by the MPAA for brief strong language.) Print this post
Posted by Harry Forbes at 2:45 PM