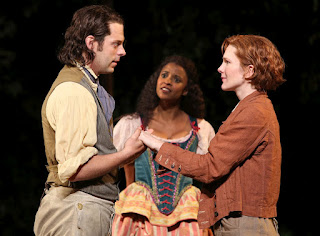 Director Dan Sullivan’s production of Shakespeare’s arguably most beloved comedy gets the Delacorte season – which also includes Sondheim and Lapine’s “Into the Woods” – off to a very nice, if not altogether sublime, start.

Attractively designed by John Lee Beatty certainly, with the Forest of Arden improbably even lusher than the actual surrounding Central Park foliage, well lit by Natasha Katz, attractively scored in Bluegrass style by Steve Martin no less, cast with solid New York actors, and sensibly directed by Sullivan, the production has a lot going for it. But the rub, alas, is the Public’s house style of rendering Shakespeare in resolutely American accents – which comes across all too clear in Acme Sound Partners’s pristine sound design – undercutting time and again the poetry of the lines, and paradoxically, sometimes rendering them less, rather than more, comprehensible .

Though the conceit of this production is that it is set in “the rural American South, circa 1840,” the accents are little different than most other Public Theater Shakespeare productions.

Lily Rabe – last seen at the Delacorte as Portia in Sullivan’s “The Merchant of Venice” playing another of the Bard’s heroines compelled by circumstance to assume male disguise – is the raison d’etre here, and as Rosalind, she holds the stage and is generally accomplished as she affects an appropriately tomboyish demeanor. But her resolutely flat, commonplace tones grow tiresome. Her finest moment comes when she throws off the disguise and reveals her true self to Orlando in the final scene, conveying a joyful release that is quite moving, but otherwise, she’s one of the least enchanting Rosalinds of my experience.

David Furr is fine as Orlando, and his speech, more than any of the others, has the right mid-Atlantic balance for American Shakespeare.

Matters of intonation aside, there’s good work from Omar Metwally as Orlando’s bullying elder brother; Oliver Platt as the fool Touchstone, Andre Braugher, double cast as Duke Senior and the usurping Duke Frederick, though he excels far more in the former, Susannah Flood as Phoebe, smitten with Rosalind in the latter’s male disguise, and Donna Lynne Champlin’s as a lusty, high-stepping Audrey. But I found Stephen Spinella’s line readings of the melancholy Jaques – intentionally monochromatic – simply dull. His “Seven Ages of Man” speech needed more poetry.

Apart from the music (and Shakespeare’s several songs sound fine in Martin’s settings), and some of Jane Greenwood’s costumes, this is a traditional mounting in every way, which is all to the good.

But this is well below the excellence of the Sam Mendes Bridge Project production of two years ago, with its mix of English and American actors. On that occasion, even the Yanks in the cast rendered the lines with far more meaning and beauty.

Still, as a pleasant summer night’s entertainment under the stars, the experience is hard to beat.

(Delacorte Theater in Central Park, 81st St. and CPW, Tickets are free and are distributed, two per person, at the Delacorte Theater in Central Park the day of the show. The Public Theater again offers free tickets through the Virtual Ticketing lottery at www.shakespeareinthepark.org on the day of the show; through June 30.
Print this post
Posted by Harry Forbes at 7:16 AM