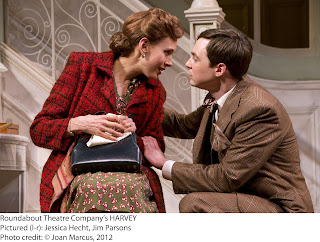 Strangely, some critics have expressed surprise that an “old-fashioned” play like “Harvey” (1944) should hold up as well as it indubitably does. Well, with a four-year Broadway run, a Pulitzer Prize, a much loved film version, and several TV adaptations over the years, the play’s lasting appeal should surely not be in doubt, as this winning revival triumphantly affirms. Human nature has not changed all that much in 68 years.

Jim Parsons’ “Big Bang Theory” popularity is drawing the crowds, and he delivers a beautifully modulated performance as Elwood P. Dowd, the gentle, kind-hearted tippler who sees good in everybody, and much to the consternation of his social-climbing sister Veta (Jessica Hecht) and man-hungry niece (Tracee Chimo), claims friendship with a six-foot-three invisible rabbit!

Parsons makes the role endearingly his own, even with the specter of James Stewart whose presence hovers over the proceedings nearly as much as Elwood’s invisible friend. It was actually vaudevillian Frank Fay who originated the part to huge acclaim, but Stewart is most in the public consciousness thanks to his film, TV, and stage appearances in the part.

Denver playwright Mary Chase’s play is full of wisdom about human nature, and the importance of imagination and fantasy in our everyday lives, but beyond these old-fashioned but still truthful sentiments is a riotously funny farce that snowballs as Veta attempts to commit Elwood to a mental institution only to have the staff lock her up instead, and let her brother free, resulting in delicious complications.

Hecht, affecting a pronounced upper crust accent, is very funny as she attempts to keep firm hold on propriety even as we see she’s not altogether so different than her sweetly oddball brother.

Charles Kimbrough gives a deft comic turn as the doctor who runs the sanitarium, and Carol Kane is his dotty wife who, in a beautifully played and delicately directed scene, bonds with Elwood, garnering a well-deserved hand.

There’s also good work by Rich Sommer (Harry on “Mad Men”) as the determined hospital attendant, Holley Fain as the pretty nurse who brings out all of Elwood’s gallantry, and Morgan Spector as the young doctor who mistakenly targets the wrong patient. Peter Benson has a good bit near the end as a plain speaking taxi driver who puts everything in perspective.

David Rockwell’s sets – the Dowd home and the reception area of the sanatorium – are most attractive, and Jane Greenwood’s costumes are period perfect.

Scott Ellis directs with great affection, keeping everything true to the era, without patronizing the material.