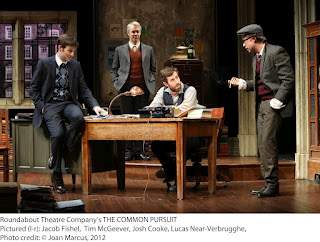 Moisés Kaufman’s revival of Simon Gray’s now somewhat dated 1984 play about six Cambridge friends who found a literary magazine (the titular “Common Pursuit”) and the course of their lives over 20 years with its successes, disillusionments and betrayals, is a fine one. If memory serves, it’s superior to the 1986 New York Off-Broadway premiere despite a stellar cast that included Kristoffer Tabori, Nathan Lane, Peter Friedman, Judy Geeson, and Dylan Baker.

Against Derek McLane’s evocative sets – editor Stuart’s rooms at Cambridge, and then his office over the decades – the excellent ensemble cast inhabit their characters well and, though all American, register as convincingly British, only rarely descending to caricature.

In a way, the plot resembles that of “Merrily We Roll Along” in its look at the tarnishing of youthful idealism, though unlike the Sondheim-Furth musical, and the original Kaufman and Hart play, the action moves forward, except for the final scene which takes us back to Cambridge.

Kaufman directs most persuasively and makes a better case for the piece – often judged a poor relation to Gray’s “Butley” and “Otherwise Engaged” -- than the 1992 BBC adaptation which aired on PBS here, with Stephen Fry, Tim Roth, and Andrew McCarthy.