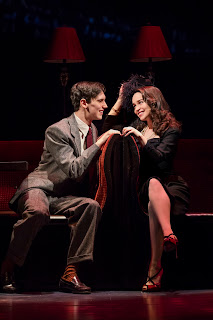 The latest attempt to dramatize Truman Capote’s classic novella is, I fear, no more likely to succeed at the box office than the legendary 1966 Broadway musical version with Mary Tyler Moore and Richard Chamberlain (and that, at least, had an engaging score by Bob Merrill), nor, I gather, present director Sean Mathias’ 2009 London effort with Anna Friel.

Despite the considerable credentials and savvy of adapter Richard Greenberg, Mathias, and the rest of the production team, there is simply not enough dramatic impetus to the story to grip an audience.

To Greenberg’s credit, he uses a good deal of Capote’s text. And though it’s delivered by the writer protagonist Fred (Cory Michael Smith) rather in the manner of Tom in “The Glass Menagerie,” the backstory he relates is nowhere near as involving as the Tennessee Williams classic.

English actress Emilia Clarke (“Game of Thrones”) has something of the measure of the role, but lacks the magical quality that made Audrey Hepburn so delectable in the film version. Still, she’s frequently touching, and the Sally Bowles-like dynamic with aspiring writer Fred occasionally registers.

Smith’s performance is proficient, but the lengthy exposition with which he’s saddled and his mostly glum demeanor grow tiresome.

The supporting players, including Suzanne Bertish, Lee Wilkof, Eddie Korbich, Pedro Carmo, and the rest, all do credible work, and George Wendt and Murphy Guyer are standouts, but there’s little opportunity for any of them to really shine.

David Merrick famously shut down the musical after four performances, noting that audiences were leaving the show in a depressed state. Sad to say, that pretty much describes the crowd filing out of the Cort Theatre.