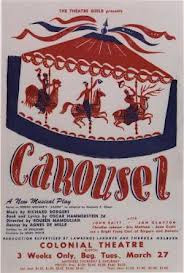 The New York Philharmonic’s “Carousel” was, quite simply, a triumph for all concerned, and the best live performance of the work I’ve ever seen, excepting the State Theater’s revival with John Raitt which I fondly recall seeing as a child.

The orchestra on this occasion – gloriously led by Rob Fisher – was a marvel. Never has that opening Waltz, with which Rodgers cleverly opened the show rather than composing a conventional overture, sounded so sumptuous. That was only the first of many goosebump moments. And the pleasures were not only musical, as John Rando’s direction was as finely detailed as for a fully staged production.

Kelli O’Hara, tamping down her trademark blondeness with a long brown wig, was an ideal Julie, perfectly conveying the selfless love of her character, and giving exquisite rein to her classical soprano, in “If I Loved You” and “What’s the Use of Wond’rin?”

Jessie Mueller, who proves her versatility with each new role (“On a Clear Day,” “Into the Woods” (in Central Park), and “The Mystery of Edwin Drood”) was a most delightful Carrie, showing off her soprano capabilities, too.

Opera baritone Nathan Gunn has proven his mettle in musical roles (“Show Boat” and “Camelot”), and so was a logical choice for Billy Bigelow, even if his dark timbre was more in the vein of Robert Merrill and Alfred Drake, both of whom recorded the role, than Raitt or the film’s Gordon MacRae. He earned a stupendous ovation for the “Soliloquy” and delivered another showstopper in the second act with “The Highest Judge of All,” acting persuasively all the while.

The famous bench scene for Julie and Billy was movingly sung and sensitively played, complete with falling blossoms.

Jason Danieley was a refreshingly different Mr. Snow, less “overbearing” and more “young, seafaring” to quote Carrie’s description of her intended. The “When the Children are Asleep” sequence with Mueller was as much a triumph as the Julie-Billy bench scene, and nearly as long.

Stephanie Blythe, such an outstanding Mother Abbess in the Carnegie Hall “Sound of Music” last season, made a formidable Nettie, using her gloriously firm mezzo to spectacular effect in “June is Bustin’ Out All Over” and, of course, “You’ll Never Walk Alone.”

In speaking parts, Kate Burton made an ideal Mrs. Mullin, the lusty owner of the carousel, and John Cullum was ideally cast as the Starkeeper and Dr. Seldon (at Louise’s graduation scene), the embodiment of a New England small-town doctor.

Though the songs and underscoring were all intact, “June is Bustin Out All Over” lost its dance sequence, though the relatively short stage version is nothing like the elaborate sequence in the film, and “Blow High, Blow Low” ended without its hornpipe dance. But Louise’s second act ballet – choreographed by Warren Carlyle (with some homage to original stager Agnes DeMille) superbly danced by Tiler Peck in the second act – was nearly complete except for some cuts necessitated by the elimination of some of the Snow children in that sequence.

Still, with the New York Philharmonic in such ravishing form, that missing music would have sounded mighty fine.

Though Hammerstein’s book was modified by Chad Beguelin, this was still a very full, satisfying evening. And it all played out against Allen Moyer’s stylized but perfectly evocative setting, expertly lit by Ken Billington.

Miking, which used to be problematic at Avery Fisher Hall for non-classical events, was well handled in Peter Fitzgerald’s sound design with everything registering cleanly.

At the end, the audience, which had been appropriately effusive in its appreciation throughout, rose to its feet as one.

Thankfully, the magical performance will be telecast nationally on PBS’s “Live from Lincoln Center” April 26.