Hands on a Hardbody (Brooks Atkinson) 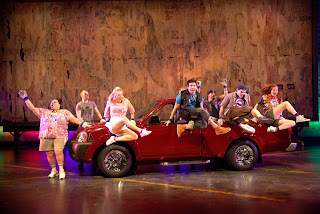 This most unusual musical – adapted from a 1997 documentary by S.R. Bindler – revolves around ten hard-luck average Americans trying to win a Nissan “hardbody” red pick-up truck by keeping at least one hand on it at all times while standing, brief scheduled breaks notwithstanding, before – over the course of fours days -- fatigue or frayed nerves or some other happenstance causes them to break contact.

They’re a motley crew of lovable losers based, some more closely than others, on the actual people in the documentary. The challenge that playwright Doug Wright, composer/lyricist Amanda Green and Phish frontman Trey Anastasio have had to overcome is the potentially static setup of holding on to a stationary car, with the inevitable one-by-one drop off. There’s always a certain tedium in this construction, be it “They Shoot Horses, Don’t They,” “A Chorus Line,” or even Agatha Christie’s “And Then There Were None.”

With the help of Sergio Trujillo’s inventive movement (much pushing around of the car), and Neil Pepe’s as-resourceful-as-possible direction, one’s interest is held although it’s not till the second act that one feels genuine dramatic tension, as the contest grinds down with only three standing.

It’s good to see Keith Carradine back in a Broadway musical, this time as a retired oil rig worker sounding exactly the same as his memorable turn in Robert Altman’s “Nashville” where he won all hearts with his beguiling “I’m Easy” and Broadway’s “The Will Rogers Follies.” And Hunter Foster is strong as the most belligerent of the contestants, a former winner back with a vengeance to do it again.

On the distaff side, Keala Settle impresses as an evangelical lady of ample voice and proportions (who “carries it well,” as one character remarks). She has a lengthy laughing on the verge of hysteria scene that is quite a tour de force, and it leads into the closest the show comes to a showstopper: the gospel-flavored “Joy of the Lord.”

But the cast is uniformly good, with everyone registering as “real.” Allison Case and Jay Armstrong Johnson as the young people who fall in love; David Larsen as a troubled marine; Jacob Ming-Trent as a Snickers-loving heavyset guy; Kathleen Elizabeth Monteleone as a feisty blonde who catches the eye of Longview, Texas dealership sales manager Jim Newman; Mary Gordon Murray as Carradine’s wife watching, like the other spouses, from the sidelines; Connie Ray as the dealership’s pragmatic PR woman; Jon Rua as a Mexican-American student fighting racial stereotyping; Dale Soules as a gravelly voiced, no-nonsense wife to husband William Youmans; and Scott Wakefield as the local DJ doing the play-by-play.

The Anastasio/Green songs are better than alright in the catchy rock, country. gospel vein. “Burn That Bridge,” “Stronger,” “Born in Laredo,” and the finale, “Keep Your Hands on It,” which more or less sums up the moral of the show – holding on to something in life – where we learn the after-story of all the characters.

Visually, the most prominent feature of Christine Jones’ set is, of course, the car at center stage, but Susan Hilferty’s character-perfect costumes and Kevin Adams varying lighting design add variety.

The show premiered at the La Jolla Playhouse in San Diego. New York may be a touger proposition, but the audience at my performance seemed to like it, even at a somewhat overly long two-and-a-half hours.