Vanya and Sonia and Masha and Spike (Golden Theatre) 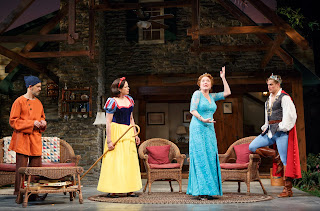 Christopher Durang’s latest – a modern-day comic riff on Chekhov involving adult siblings named after iconic Chekhov characters by their theater-enamored parents – could so easily have proven tiresome or overly precious. Or an amusing premise that missed its mark. Or one of those plays with a promising first act that fizzles in the second.

But no. I’m happy to report the play is a laugh riot from start to finish, the funniest show on Broadway since “One Man, Two Guvnors” which, as those who saw that British import well know, is high praise indeed. Durang’s inspiration never flags.

Two lonely souls -- gay Vanya (David Hyde Pierce) and dowdy adopted sisterSonia (Kristine Nielsen) – lead dull lives in their Bucks County farmhouse. They had taken care of their ailing parents and now have only each other for whom to care and squabble with. They’re being supported by their usually absent glamorous movie-star sister Masha (Sigourney Weaver).

When hilariously self-absorbed Masha visits the family homestead in tandem with studly young lover Spike (Billy Magnussen), an endearingly vain aspiring actor with a penchant for removing his clothes at every opportunity, resentments and long-standing grievances bubble up.

Adding to the Chekhovian ambience, visiting young actress Nina (Genevieve Angelson) who idolizes Masha, becomes part of the household, bringing with her overtones of “The Seagull.” For good measure, there’s Vanya and Sonia’s loopy cleaning lady Cassandra (Shalita Grant) who, as her name suggests, lords it over all of them with dire predictions about the future and occasional forays into voodoo.

Every one of these performances is pitch-perfect, under Nicholas Martin’s assured comic direction. Weaver has time and again shown considerable comic chops, but never more effectively than here, as the narcissistically girlish Masha contriving to bring everyone to a costume party where she’ll dress as Disney’s Snow White, while Vanya, Sonia, and Nina play strictly supporting roles as various dwarves.

As it happens, Nielsen’s Sonia comes into her own on the way to the costume party in a side-splitting way I shan’t spoil, and later delivers the show’s most poignant moments in the sort of phone scene that used to win actresses Oscars. (Think Luise Rainer.)

Pierce is very nearly the straight man (and a supremely accomplished one at that) for three quarters of the play, but bursts forth in a glorious tirade nostalgically extolling the pre-digital days when people actually communicated with each other.

Durang keeps the one-liners coming fast and furious, but often surprises with his dialogue in the most delightful ways.

I didn’t see it in its earlier incarnation at Lincoln Center, but David Korins’ set (illuminated by Justin Townsend) looks just fine on the Golden stage. Emily Rebholz’s droll costumes – including the Snow White designs and Sonia’s party dress – add to the fun.