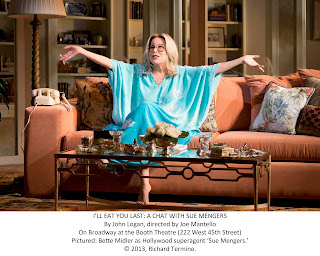 The time is 1981, and Mengers, accurately outfitted by Ann Roth, is holding court on her plush sofa (on designer Scott Pask’s sumptuous set) just before hosting one of her legendary all-star dinner parties. She’s anxiously awaiting a call from Barbra Streisand whose lawyers fired Mengers just that afternoon after a long relationship.

Over the course of the evening, we learn how Mengers and her parents fled Hitler’s Germany, settled in the United States, how she taught herself English by watching movies, reacted to her father’s suicide (he died of “thwarted dreams,” she says) and how she fell under the spell of Hollywood. Since she didn’t have the talent to be on the screen herself, representing talent became the natural fallback.

Logan’s script is riddled with big names and deliciously juicy stories which Midler relates with gusto, submerging her usual stage personality, so what we get is not the usual Divine Miss M, but a fully developed and fresh characterization. As this is her first dramatic role on Broadway, Midler’s triumph must rate as significant as that of Tom Hanks this season.

Streisand plays a major part in the story. One minute, Mengers is recalling the blazing talent she recognized when the singer was just starting out in Village clubs; the next, she’s using the c-word as she rails against Streisand for not calling and making peace. For all that she berates Streisand throughout the show, she’s in genuine awe of the star’s artistry and taste. Mengers takes the blame for casting Streisand (and Gene Hackman) in the oddball little comedy “All Night Long” (a major flop), directed by her husband Jean-Claude Tramont. Midler’s account of this debacle is another brilliant set piece.

Mengers admits her ruthlessness in going after clients. After traveling all the way to Sissy Spacek’s Virginia farm to try to land the star, she reasons with incontrovertible logic, “If I don’t steal her, someone else will.”
Her stories about scoring Hackman his breakthrough role in “The French Connection,” Faye Dunaway hers in “Chinatown,” and the rest are fascinating.

But Logan goes beyond the dish and bitchery to show Mengers’ serious side, as when he has her discourse on the necessity of talking in the language of one’s clients. She admired Julie Harris so much that she went out and read Ibsen and Shakespeare. (“You are the public face of the client,” she reminds us.)

She gives a recounting of “Sue’s Golden Rules,” which are, more or less, never blow a deal over money, don’t remind your client of when they were up and coming, never tell the client the truth, and above all, know how the spouse can interfere. That last imperative leads to a particularly touching story about losing “Love Story” star Ali McGraw (of whom Mengers was particularly fond) to Steve McQueen, whom she excoriates in no-holds-barred language. But there’s a rueful poignancy in that story, and several others.

Though Midler is sedentary for the evening, the sheer force of her personality – guided by the savvy Joe Mantello – never registers as static. Logan’s material is solid, and though subsequent interpreters of the role will be hard pressed to match Midler’s special qualities, I can think of several actresses – Linda Lavin, Tyne Daly, Judith Light – who could sink their teeth into this role.

But, for now, the role is gloriously Midler's, and not to be missed.