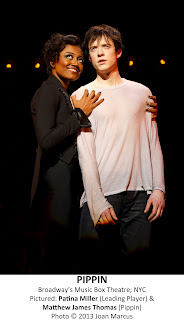 This is a superbly imaginative remounting of Stephen Schwartz’s 1972 hit about the son of Charlemagne and his quest for fulfillment through war, sex, and then ordinary life.

The show, memorably stylized by Bob Fosse back in the day, has been given a marvelous facelift by Diane Paulus, who performed similar wizardry with “Hair” for the Public Theater in 2009.

With the help of Scott Pask (sets), Kenneth Posner (lighting) and Dominique Lemieux (costumes), she has given the show a circus backdrop. But those with an aversion to circus motifs needn’t worry. The effects never overpower the narrative. When things turn serious, as they do on a few occasions, the acrobatics give way to the story-telling.

The production started life at the American Repertory Theater at Harvard University. The cast has been imported intact, and they are all superb.

Ben Vereen’s original role of the Leading Player – both narrator and Pippin’s conscience – has had a gender change, and Patina Miller, late of “Sister Act,” is a virtuoso charmer throughout. With her million dollar smile and lithe figure, she’s both a dexterous dancer (and, when she needs to be, acrobat) and powerhouse singer. She’s a delight, even when her character takes on much darker tones near the end of the show.

Real-life husband and wife Terrence Mann (looking like Donald Sutherland with his flowing white hair and beard) and Charlotte d’Amboise (a knockout dancer, as ever) are perfectly cast as King Charles and his scheming second wife Fastrada.

Everyone who saw the original remembers Irene Ryan’s surprising showstopper “No Time at All,” but Andrea Martin, though not the stereotypical “old lady” that Ryan played, goes her several steps further in her version which gets the biggest hand of the evening, and even a standing ovation.

Erik Altemus is amusing as Fastrada’s preening, ambitious son. And Rachel Bay Jones is very special as Catherine, the sad widow who takes in Pippin when he has hit rock bottom.

As Pippin, Brit Matthew James Thomas is utterly appealing as a tousled hero, singing beautifully and conveying the requisite innocence and disillusionment.

Chet Walker’s choreography “in the style of Bob Fosse,” pays just the right sort of homage to his progenitor, and the strutting section of “Glory,” that formed the basis for the TV commercial that is credited with making the original such a hit, is most delightfully recreated here.

Beyond Paulus’s brilliant vision, the “circus creations” of Gypsy Snider and her Montreal-based Les 7 doigts de la main are most artistically done, and the true acrobats are blended pretty seamlessly with the Broadway gypsies.

Roger O. Hirson’s book and Schwartz’s score (in Larry Hochman’s orchestrations), hold up very well indeed. The cast album should be a treat.