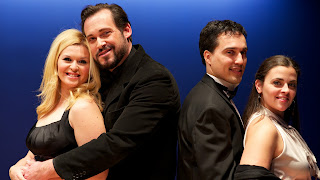 LOONY’s two-night revival of Victor Herbert’s extravagantly tuneful “Sweethearts” rates as one of the plucky company’s best outings. Sensitively conducted by Michael Thomas (who did such a sublime job with the company’s production of Herbert’s “Eileen”), and directed ever so resourcefully by Gary Slavin, fresh off his wonderful Blue Hill Troupe “Mikado,” the 1913 operetta was generally well cast.

Olga Xanthopoulou, a blonde beauty with a big opera voice, was Sylvia, adopted daughter of a Brussels laundress, If her voice was almost too powerful for the ingénue role, and her characterization lacked the ideal innocence, she did her best to scale back, and adopt the requisite style. Peter Kendall Clark as Prince Franz, heir presumptive to the throne of Zilania, also had powerful pipes though occasionally bellowed his high-lying part, Still he was a manly and stalwart presence. And their duets – “The Angelus” and especially “Cricket on the Hearth” – clicked.

Eapen Leubner played the cad Lieutenant Karl and got things off to a promising start with his multi-verse “The Game of Love,” which usually comes late in Act Two. Stefanie Izzo sang neatly as the scheming milliner Lianne, and did nicely with “Jeanette & Her Little Wooden Shoes,” charmingly staged by Slavin, and backed by the three comic opportunists Von Tromp (Jonathan Fox Powers), Mikel (Victor Khodadad), and Slingsby (David Seatter) in clunky wooden shoes.

Seatter, channeling Hollywood’s Nigel Bruce, made the most of his big number, “I Don’t Know How I Do It, But I Do.” Powers’ “Pretty as a Picture” was also satisfyingly vocalized.

Vera Slywotsky as Dame Paula, proprietress of the laundry and mother of the girls, made a personable narrator, in adapter Alyce Mott’s revised version which adhered to the original Harry B. Smith book in most of the essentials. The score was adapted by the late Dino Anagnost. Their adaptation was first heard in The Little Orchestra Society performance in 2005 with much larger forces, but LOONY held its own.

The ensemble – Dame Paula’s four daughters and various soldiers – were commendable, impressing in their solo bits, too. When they cut loose for the Act One finale and other ensemble moments, the result was spine-tingling, if a mite too rafter-raising for the intimate Thalia Theatre space. But, as with Ms. Xanthopoulou’s commanding vocals, it’s churlish to complain when the results were so exciting.

Dramatically, the performances were a mixed bag with some handling their lines more adeptly than others, but the six-piece chamber orchestra was consistently stylish under Thomas’ direction.

All in all, the Thalia proved a most congenial venue for the company, far superior to their last two spaces. I hope they return there for next season’s offerings, Victor Herbert’s “Orange Blossoms” and Sigmund Romberg’s “The New Moon.”

(Light Opera of New York, info@lightoperaofnewyork.org)
Print this post
Posted by Harry Forbes at 11:58 AM